The two standard 500mm lenses with a 2× converter 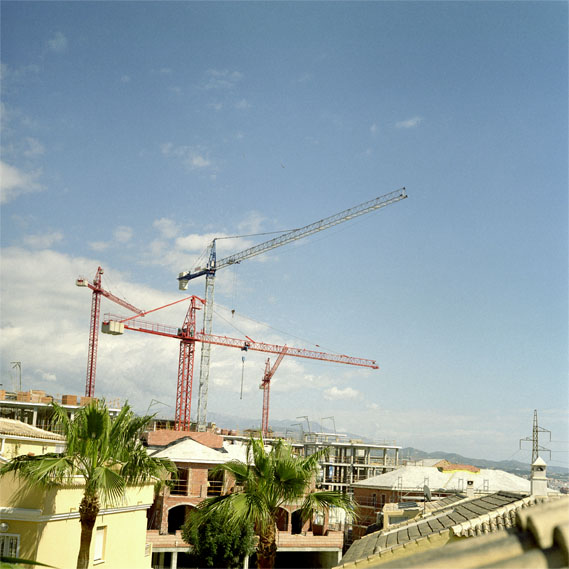 Coverage
The results with this combination are quite frankly extremely disappointing.  There is considerable vignetting at maximum aperture, especially in the top corners and along the whole of the bottom edge.  I wonder if this is caused by obstruction from the raised mirror, only occurring when the light rays are nearer to parallel, i.e., with lenses of extremely long focal length.  When the lens is set at f/11, the vignetting does not extend so far into the picture, but it is still extremely obvious.  Along the bottom edge it has virtually disappeared, but the transition to vignetting in all four corners is a lot sharper.

Resolution
Even at full aperture the resolution in the centre is very good, although as one gets nearer the edges and  especially  the corners, colour fringeing and then vignetting detract from the apparent sharpness of the image.  At maximum aperture, depth of field is of course very shallow, and it is impossible to get both cranes in focus.  Stopping down to f/11 naturally results in a considerable increase in depth of field, bringing both cranes into reasonably sharp focus.  At the extreme degrees of enlargement that I am using to check these images, it is possible to see that the image does sharpen up considerably at the smaller aperture, but this may in part be because focus was not spot-on.

Colour Fringeing
This combination provides chromatic aberrations to write home about!  In the centre it is not visible, but towards the edges it is apparent when the image is greatly magnified, and towards the corners it is massive.  Stopping down to f/11 does not result in a significant reduction in chromatic aberration.  In fact, as the image sharpens up, perhaps the chromatic aberrations are more obvious at this degree of enlargement.  With the 2× converter being used, this is of course equivalent to f/22, and it is doubtful if users are going to be able to stop down more than this without having to use shutter speeds that would be so slow that image sharpness could be degraded by subject or camera movement.

The key question about the vignetting and colour fringeing is this: is this problem inherent in the APO lens on its own, in the converter on its own, or a consequence of using the two together?

The 2× converter used here is of course the one designed for use with the longer Schneider lenses on the Exakta 66.

The rear element of the APO lens  and the diaphragm behind it!  are well recessed within the lens, so mounting the Schneider converter with its protruding front component is no problem at all.

At maximum aperture, performance is very close to that obtained by this lens on its own  see the 500mm-600mm review here.  There is some slight fall-off in brightness just visible in the upper corners in these shots of a clear blue sky, but most people would not notice it, and it is in fact less than when the lens is used on its own.  With the lens stopped down to f/11, this hint of darkening disappears almost completely, leaving a tiny mark in the top-left corner of the negative, within the area that was masked in the processing lab and therefore not on the print.  Remember that I am printing and examining beyond the limits of the frame that is usually printed or visible within a slide frame.  Even at full aperture, coverage is actually better than with the Carl Zeiss Jena 1000mm Spiegelobjektiv, which itself  is quite satisfactory.

The f/11 (effective f/22) shot was repeated [C427-4] with a different shutter speed (1/60) after a change in the light, with identical results as regards coverage.

Resolution
At maximum aperture, resolution is excellent.  Inevitably, when the lens is stopped down to f/11 (effective f/22 as regards light transmission, through the 2× converter), the depth of field increases substantially and the image sharpens up throughout.  This may in fact reveal that focus was a fraction off, and at full aperture this would be visible at the great degree of magnification used in these tests.

Colour Fringeing
Here we see the answer to the question that we asked above, when looking at the results of using this lens with the Arsenal 2× converter:  The key question is this: is this problem inherent in the APO lens on its own, in the converter on its own, or a consequence of using the two together?

When the lens is stopped down the same degree of chromatic aberration is present as at full aperture  although this is not visible at normal degrees of enlargement.  In fact, the increased sharpness of the edges of structures within the image may even make the colour fringeing more visible, but only at massive degrees of enlargement.

Given the disappointing results when the Arsenal 2× converter was used with their 500mm APO lens, on this occasion I decided to test the Pentacon only with the Schneider converter.

Coverage
On the print from the lab, coverage looks virtually faultless  perhaps a slight decrease in brightness towards the corners, only visible in this shot because of the totally clear, blue sky.  On the negative, it is possible to observe a tiny amount of additional darkening in the top, left-hand corner, and along the bottom edge of the image, although this is probably within the area that would be masked in an enlarger or a slide mount, as indeed it was in the print from the lab.  There is scarcely any difference between full aperture and stopping down to f/11 as regards coverage.  The darkening at the extreme top-left corner becomes more pronounced when stopping down, as the brightness of the rest of the image evens up, but this is not visible on the print from the lab, and so we can assume that it is in fact outside the normal image area.  Since images taken with all long lenses show this corner darkening, it appears to me that this is probably a shadow from something within the camera throat itself, and so not caused by the lens.  However, since it is not within the image area, it is not of significance.  It is not to be confused with the deep vignetting introduced when the Arsenal 2× converter is ued, which intrudes very visibly into the image area.

Resolution
Resolution at full aperture is excellent.  Stopping down to f/11 inevitably increases the depth of field, which with such a long lens and converter combination naturally sharpens up parts of the image.  However, for all normal purposes, the full-aperture resolution is very acceptable.  This is another excellent result.

Colour Fringeing
There is a very small amount of colour fringeing, only visible at massive degrees of enlargement, when the 500mm Pentacon lens is used with the Schneider-Kreuznach 2× converter.  The results with the 1000mm Carl Zeiss mirror lens are better  but then, mirror lenses do not suffer from chromatic aberrations.  At full aperture and using the Schneider 2× converter with each lens, it is hard to say which lens is better, the Arsenal APO 500mm or the Pentacon 500mm.  Stopping down the lens does not normally change the amount of chromatic aberration, but with this lens stopped down to f/11 (effective aperture through the converter, f/22), colour fringeing does in fact appear to be less obvious.  At either aperture it is in any case too small to be observable at any normal degree of enlargement.  Note that in these enlargements we can see the grain of this ultra-fine-grain film!


To go back to the beginning of the lens tests, click below and then choose the focal length that you want to read about.
Back to beginning of  lens tests