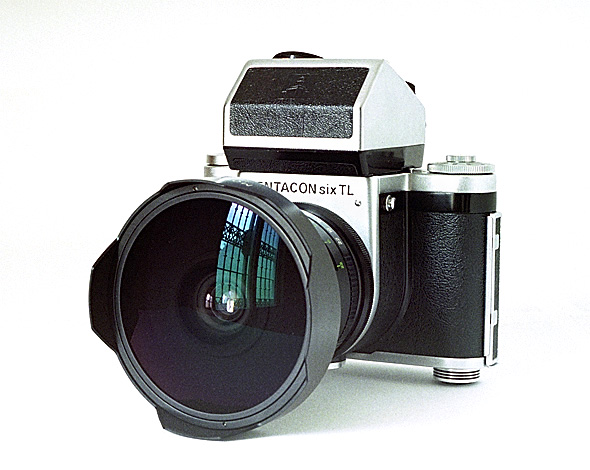 It has been said that it is worth buying a Pentacon Six (or Kiev 60) in order to be able to use this lens – even if one isn’t interested in using any other lenses with these cameras.

This 30mm lens is a full-frame fish-eye lens for Medium Format.  It has a diagonal angle of view of 180 degrees and is the widest lens available for full-frame 2¼ square (6×6) cameras.  (This is approximately equivalent to a 16mm lens on a 35mm camera – see comparative data here )  It has of course a fully-automatic diaphragm, with a pin at the back of the lens (inside the camera when mounted) that stops the lens down to the chosen aperture.  There is no depth-of-field preview lever, but the depth of field with this ultra-wide-angle lens is so great that no such lever is needed.  I do, however, recommend that you focus the image!  It is often possible to get everything sharp from quite close-up to infinity, using the principle of hyperfocal focussing – for details of this, see here (scroll down to the bottom).

This lens bears a remarkable resemblance to the Carl Zeiss Oberkochen (former West German) 30mm lens designed for the Hasselblad – but then, it would be difficult for it to look much different, given the task it has to perform.  The West German Zeiss lens retails for a price that is reported to be in the region of US$6,000.   The latest, multi-coated version of the Arsenal 30mm lens retails for a price in the region of US$200.  It is easy to see that even if you already possess a Hasselblad and a range of Carl Zeiss Oberkochen lenses for it, you are going to need very deep pockets or an extremely lucrative commission to justify spending $6,000 for a lens that inevitably will rarely be used.  It would seem to make a lot more sense to buy the Arsenal lens and a suitable body to mount it on – always assuming that the quality of the images that it delivers is comparable to that obtained with the Zeiss lens.

This Arsenal lens was marketed for many years with the name “Zodiak-8B”.  With the dissolution of the Soviet Union, Arsenal re-branded its lenses “Arsat”, and this lens is no exception.  For a number of years, the “Arsat” version was almost identical with the original Zodiak – same hard case, same single coating, and just a few cosmetic changes, such as the design of the focussing ring surface.  But with the newest version of the Arsat 30mm lens there is one major – and important! – difference: the new version is Multi-Coated.


A note on lens mounts

It is extremely important to get a lens with the right mount for your camera.  Arsenal in Kiev made its lenses with different mounts for two different ranges of Medium Format cameras:

On this website we are interested in lenses with the Pentacon Six lens mount.  In theory, the Kiev 60 is identical to this, although different manufacturing tolerances meant that sometimes there are minor compatibility problems, which can usually be overcome with a file or a screwdriver!

Lenses for the Pentacon Six mount have the Russian equivalent of letter b after the lens name.  This is like a b with the addition of a horizontal bar at the top of the upright: Б.
Lenses for the Kiev 88 mount have the Russian equivalent of a letter v after the lens name.  Unfortunately, in the Cyrillic alphabet this has the shape B.
The scope for confusion is obvious!  The following table summarises the situation:

For more information on this, see here (Scroll down) and here. 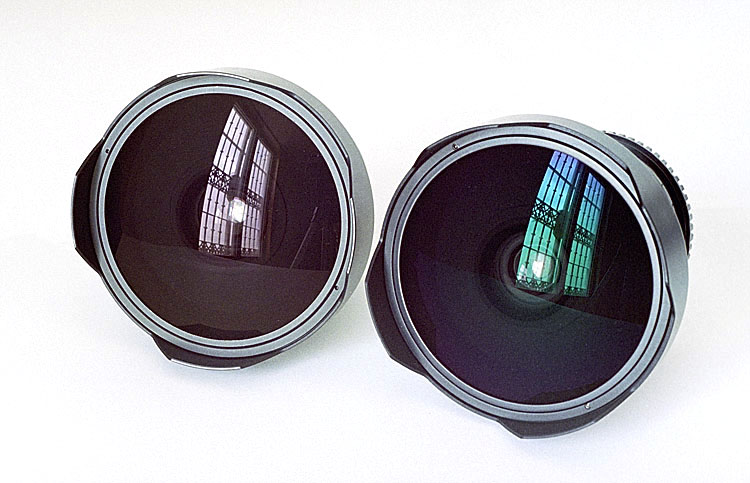 C442-2A
The coatings of the two lenses can be appreciated here.
The Zodiak is on the left, and the Multi-Coated Arsat is on the right.

It is clearly impossible to attach filters to the front of a fish-eye lens without cutting off the edges of the frame.  For this reason, such lenses are normally designed to take (or include) filters at some point within or behind the lens.  The Zodiak and the Arsat are supplied with 4 filters: orange, green, blue and UV.  One filter must always be mounted on the lens.  For colour photography, this will be the UV filter.  Both versions of this lens are supplied with a case, a hard case for the Zodiak and the new-style soft nylon case with the Arsat, and both cases have a compartment in the lid that holds the three filters that are not in use at any given time.  If buying one of these lenses, make sure that you get the case and that the filters are there.  Also check that the fourth filter is mounted in the rear of the lens.

In its description of the Zeiss Distagon lens, Hasselblad states that this is “Supplied in a leather case with three filters: a yellow ..., an orange ..., a conversion filter for using daylight-type film in tungsten light ..., plus a neutral glass.”  I don’t know if the blue filter supplied with the Zodiak/Arsat is in fact a tungsten light to daylight film conversion filter, but this could well be the case, and it should certainly get the colour balance nearly right, which is probably good enough if one is shooting with negative film.  Obviously, for slides, the conversion needs to be exactly right.  This is something I will have to investigate another day – unless someone out there can provide the appropriate information. ...

As is normal with fish-eye lenses, a petal-shaped lens shade is built onto the front of the lens, and the front lens cap fits onto this. 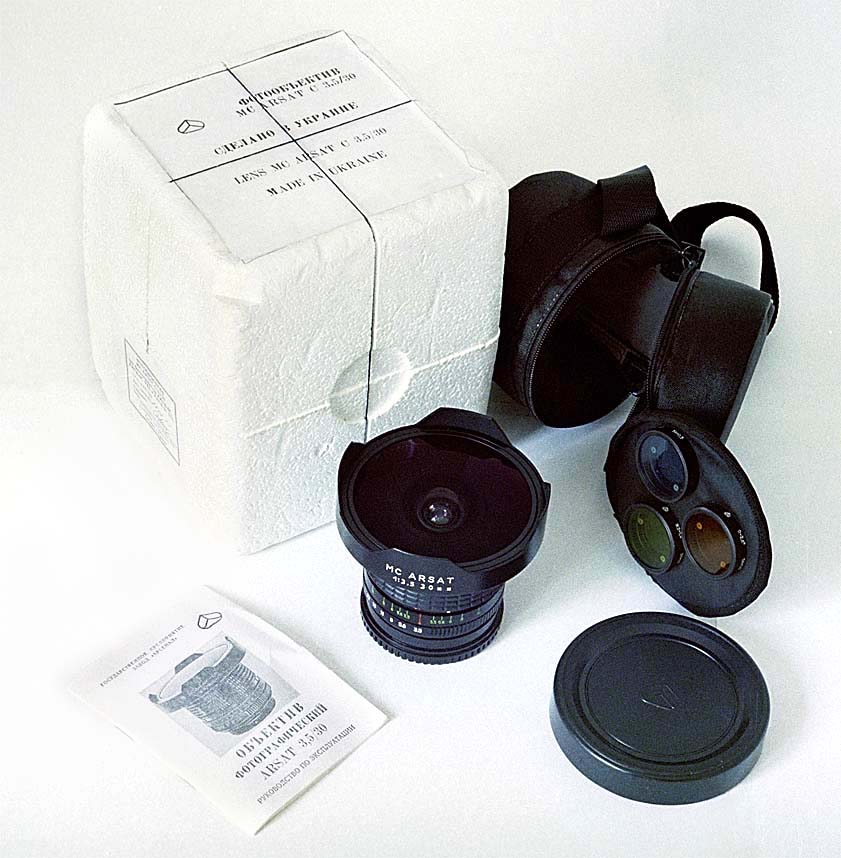 C442-1A
The MC Arsat as supplied, in polystyrene packaging with a soft case, the three coloured filters, instruction manual (in Russian!) and front and rear caps
(and of course the UV filter in place on the lens!).
One can’t help imagining that at one time boxes must have been made to hold the polystyrene.

Back to “The Scene Chosen for the tests”

To go on to the next section, click below.
Next section (The 30mm lenses, Pt 2)