Novoflex “follow-focus” lenses can be separated into two components, which the manufacturers call: 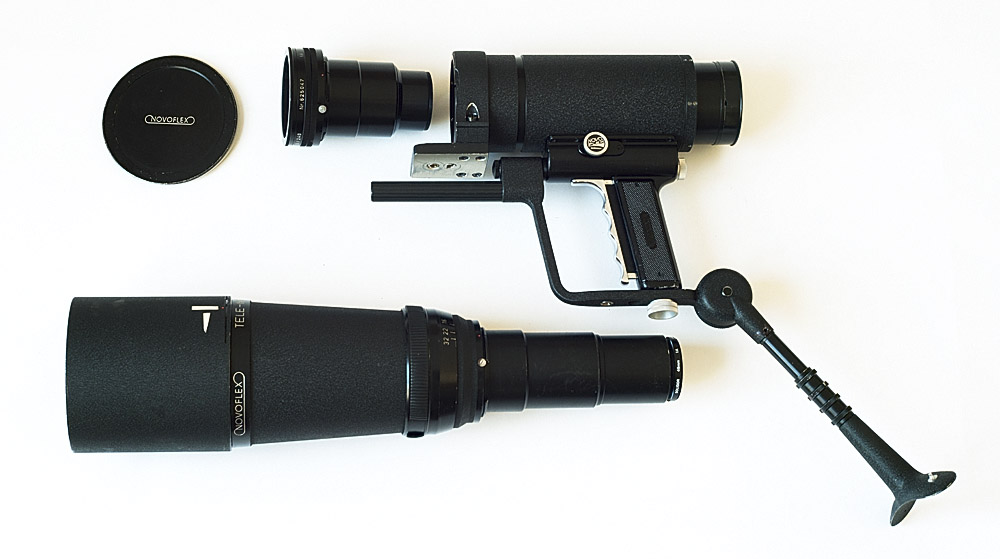 The lens head has the full optical section in its barrel, together with the aperture and aperture control ring, the lens hood (if provided) and the lens cap.  The front element of the 240mm Noflexar is so deeply recessed within the mount that no lens hood or further shade is required to shield the front of this lens from sunlight or other sources of light.

The pistol grip provides the focussing mechanism and has on the back the appropriate camera mount.  The grip with the Pentacon Six mount has the manufacturer’s code name “TISPIGRIFF”. 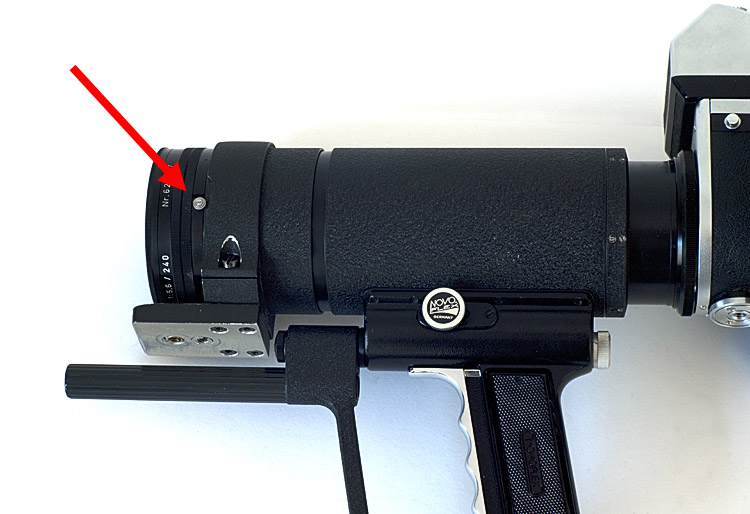 The lens head is released from the pistol grip by pushing the little button arrowed in this picture towards the front of the lens
and then rotating the lens head anti-clockwise about 1/6 of a turn to remove it from the bayonet mount inside the pistol grip.
[11122216.jpg]

If swapping the two lens heads, it will be necessary to re-focus, even if the lens pistol grip has been locked onto infinity or some other setting with the previous lens.

This is manual aperture lens: there is no auto diaphragm stop-down operation, nor even a “pre-set” lock, as is normal with lenses from Meyer-Optik and some other manufacturers; there are détentes at each full stop position, so you just count the clicks to stop down:

Focus is achieved by squeezing the trigger in the grip.  Focus can if required be then locked in place by turning the round knob that is visible just above the trigger.  There is an equivalent knob on the other side of the lens so that the focussing grip can be held in either hand, and focussing can be locked with the other hand.  Then you need to stop down and then fire the shutter.  With three things to do and only two hands, you can choose which two are critical in the particular shooting situation:

Novoflex made a point of stating that these lenses were indeed designed to be used at maximum aperture.

Obviously, if you are shooting at maximum aperture, then you only have two things to do, and operation is easy and fast.  In fact, focussing with the pistol grip is much faster and easier than with the rotating focussing helical grip that is found on most lenses, and it can be continuously varied as required when tracking a moving object such as a bird or other wild life – or even a footballer or players in other sports.

My measurement shows the minimum focus with this head and the standard pistol grip as 2895mm (approx 9½ ft), measured from the focal plane of the Pentacon Six.  This is reasonably similar to the distance quoted by Gillespie, which probably comes from Novoflex literature.

However, it is necessary to remember that, in consequence of the different thicknesses of the camera mounts used, Novoflex lenses may focus "beyond" infinity.  This is not a problem, given the easy focussing mechanism with these lenses, but it does mean that statements of minimum focus distances are approximate.

Friedrich-W Voigt writes in the "Novoflex Pocket Book", "distances expressed in figures are average values due to mechanical tolerances."  (p. 70)  Quoted from the English edition of the book, which was published by The Focal Press: London and New York, 1963.  Author: Friedrich W Voigt

For information on this book that was previously on this page and on other books about Novoflex equipment, see here.

Size and weight
The results of tests with this lens can be seen here.

I am grateful to Martin Grahl of Novoflex for the following publicity photograph from the company archive.  Here, the 240mm Noflexar can be seen mounted on a Praktisix camera, and the shoulder support strap has been added.  Martin Grahl states,
“the so called PISTOCK 66 medium format version of the chest- and shoulder support ... only differed from the 35mm version by a broad leather strap.”

– a model that definitely will have been of interest to many photographers of the day!

To see this lens with the TISPIGRIFF-U, click here and scroll down.


To go on to the next section, the review of the 500mm Tele-Noflexar, click here.