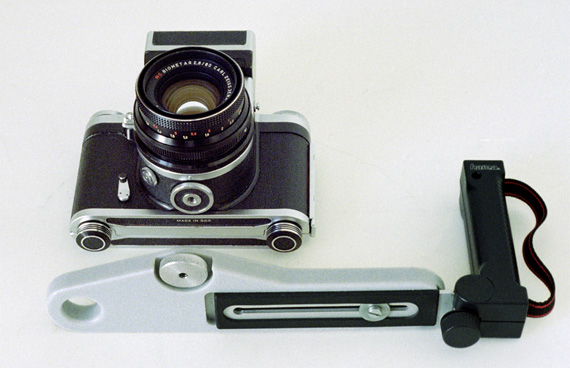 Here are detailed views of the top and the bottom of this adapter plate.

The diameter of holes C and D is right to give a snug fit on the Pentacon Six.  It would need to be larger if the adapter plate were to be used on the Exakta 66.

This adapter is a lot larger than the others shown on this website, as it goes round the bracket instead of slotting into it.  However, it achieves its object very effectively.

A slight problem with this adapter is that it is not deep enough for the whole of the base of the flash bracket to be recessed within  or at least flush with  the adapter; instead, it sits proud of the adapter (arrowed, below):

This is not a problem as long as the bracket is hand-held, which is likely to be the case on most occasions.

But if the camera with bracket is mounted on a tripod, it will not lie flat on the tripod top plate, unless this is exceptionally small:

This can of course be resolved by shaving a little bit off the end of the bracket, so that it clears the tripod top plate.

Here is the finished article:

To go on to the next section, click below.
Next section (A flash bracket for the Exakta 66)