Carl Zeiss Jena made a 1000mm mirror lens with the astoundingly fast aperture of f/5.6.  But this comes at a price, weight-wise: 14 kilograms. However, even at this weight, it is still 2½ kilos less than the Carl Zeiss Oberkochen f/5.6 / 1000mm Mirotar lens that was briefly available (to special order!) for the Hasselblad, and was subsequently supplied for various Rollei and Contax SLRs (according to Richard Nordin in his book “Hasselblad System Compendium”).  The CZ Jena mirror lens is supplied in a sturdy wooden case, bringing the total transportable weight to over 20 kilos (equivalent to your check-in luggage allowance with many airlines!).  Until recently, none of my tripods has been up to the job of reliably supporting this lens without me standing nervously nearby, ready to offer extra support.  I still feel that it is likely to have very little practical use for the average amateur – though it is superb for wildlife or for some sports photography.  (To read a report on a suitable tripod for this lens, click here.) 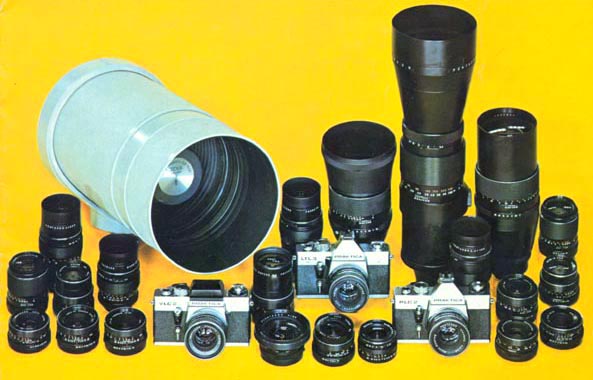 [Spiegellr: This image from the front of a Pentacon catalogue published in 1975 shows the 1000mm mirror lens, which dwarfs the 35mm cameras in the picture.
The three tall lenses at the back on the right are (from left to right): the 180mm Sonnar (with lens hood), the 500mm Pentacon (with lens hood) and the 300mm Sonnar (minus lens hood).  There was a subsequent version of both of the Sonnars, each slimmer than those shown in this photograph.]

Before looking at this lens in detail, let us look at an alternative way of achieving 1000mm with the Pentacon Six.

It is possible to add a 2× converter to the 500mm f/5.6 Pentacon lens, yielding a 1000mm f/11 effect. All converters with Pentacon Six mount available to me fit this lens. By adding the Joseph Schneider converter to it and mounting the combination on an Exakta 66 with a TTL head, one obtains full (open) aperture TTL metering with this lens! (but one has to remember to swing the ring to stop down to the chosen aperture before firing!) 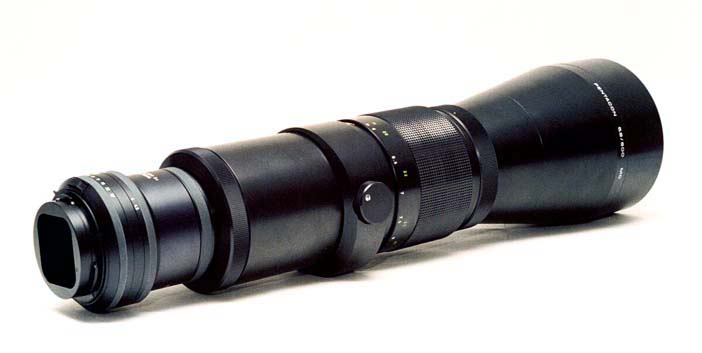 What a remarkable degree of magnification this combination yields!  With a sturdy tripod and fast film, you can really bring distant details in close-up (if you don’t get arrested first!).  At f/5.6, I used the Panagor 2× converter, which we now know I should not have done.  A large part of the image is extremely soft.  At f/11 I tried both the Panagor and the Schneider 2× converters.  The Panagor/Pentacon combination delivered a remarkably sharp image showing great detail over most of the frame.  As expected, the Schneider/Pentacon combination produced a yet sharper image. 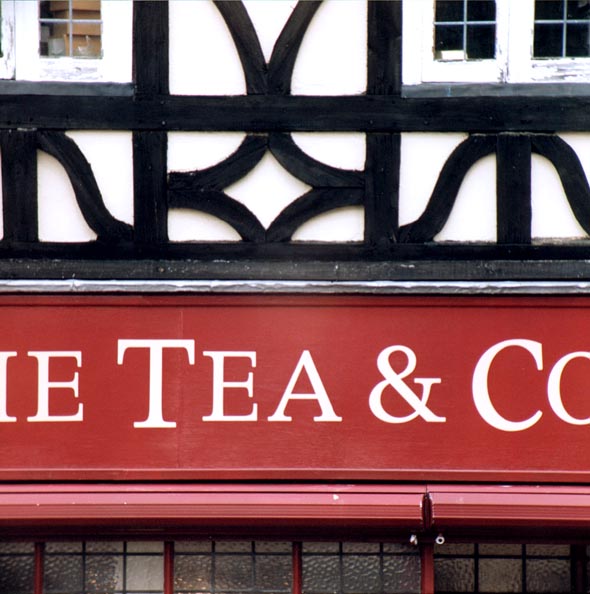 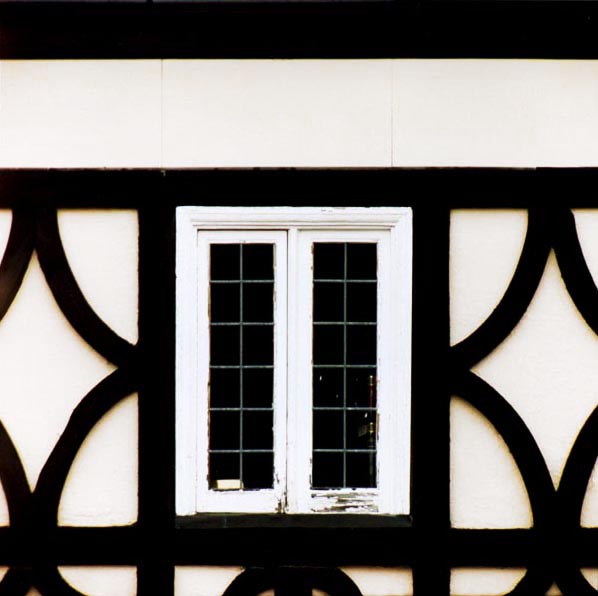 [C302-16: Pentacon 500mm at f/11 + Schneider 2× converter: Pentacon Six with 160ASA film.  Shutter speed 1/30]
(Colour differences between these two shots are due to the prints that came from the lab, not the lenses.  As I have scanned from the prints, not the negatives, I have not been able to correct this in my imaging software.) 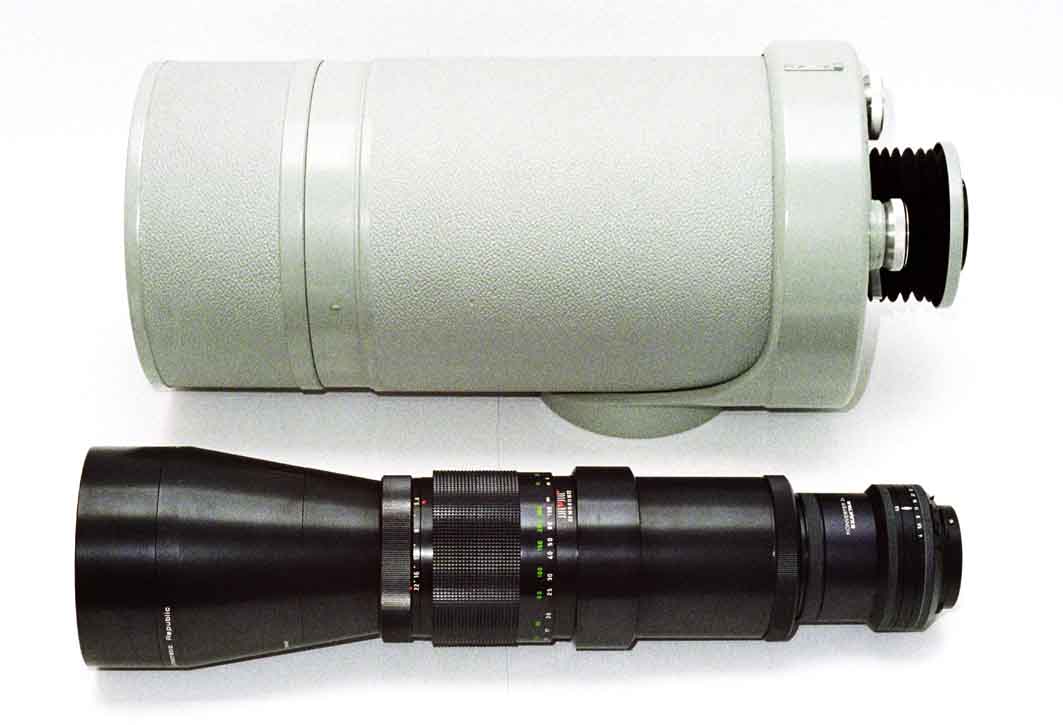 Now let’s look at the mirror lens in greater detail.

It may be possible to overcome this problem by placing the shortest of the Pentacon extension tubes, the 10mm tube, between the back of the 1000mm lens and the Kiev 88CM.  However, it would be necessary to check if infinity focus is still possible with this tube in place and the lens focussing bellows compressed to the maximum.    Information on this tube can be found here.  As I no longer have a Kiev 88 camera with the Pentacon Six mount, I am unable to check this myself, and would welcome feedback from someone with this lens and the Kiev 88CM.
___________________

To give an idea of the scale of this lens, here are some shots of it mounted on the Pentacon Six (or perhaps we should say that it is the camera that is mounted on the lens, and not the other way round!)

(Is the camera behind the lens in the first shot?  I’m not sure!)

So much for the lens itself.  Now how about the quality of the images it delivers?

Why isn’t the lens barrel black?

For most of the past 30 years or so, it has been customary to produce camera lenses with a black finish, although “chrome” finishes seem to be making a comeback.  However, the Carl Zeiss Jena 1000mm mirror lens is most often seen in a light grey that is just off-white, and there are also some that are finished in an extremely light green that is also only just off-white.  Some late-production examples were produced in black, but this is much rarer.

Why did Carl Zeiss choose these extremely light colours?

In an article entitled “Line and Length” in the 19 February 2005 issue of “Amateur Photographer”, Geoffrey Crawley wrote this:

To read a report on a sturdier tripod for 1000mm lenses, click here.