Using a flash bracket with the Pentacon Six

Much better than using an accessory shoe on the prism is to mount the flashgun higher and further to one side.  If you have a separate flash sensor, by all means mount it in the shoe above the prism.

The base of the Pentacon Six and the Exakta 66 (unlike the Kiev 60) is not flat, as the two film spool knobs project below the base.  So mounting a flash bracket is not straightforward.  You can connect one to the tripod socket just under the lens mount, but it is then likely to swing to and fro, regardless how much you tighten the fixing screw on the bracket.

I decided to have a custom adaptor plate made to interface between a standard heavy-duty folding bracket and the camera base.  Here are the components, prior to assembly:


Here is the Pentacon Six with the flash bracket and a small flashgun in place: 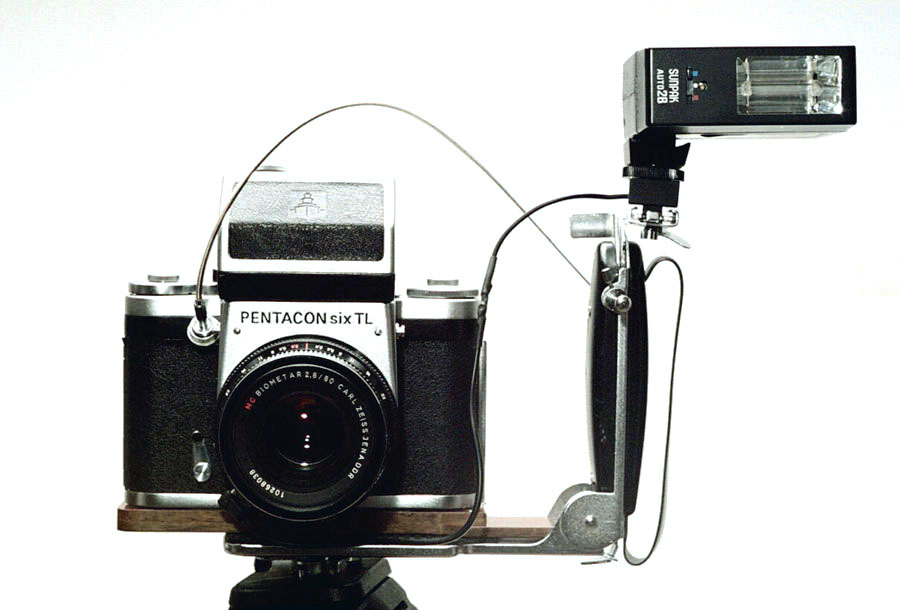 [C309-30/30A:  The flash bracket cable release is an optional extra that works well.  It is threaded to screw into the bracket and has a locking screw for longer [non flash!] exposures.]

The flashgun that I now use as standard – a Metz – only has a hot shoe, and no sync cable, so I have installed a hot shoe to cable adaptor in the socket of the bracket, extending the adaptor’s cable to reach the camera’s flash socket.  This is visible in the above shot.

A small hand grip for the camera can be seen here.  However, the grip fits close to the camera, making the addition of a flash shoe impossible.

To go on to the next section, click below.
Next section (An alternative flash bracket design for the Pentacon Six)