Hartblei lenses have a reputation for quality.  In approximately the first decade of the 21st century, various lenses with the “Hartblei” name appeared.  As far as I can determine, during those years they all used the unmodified optical components of lenses manufactured by the Arsenal factory in Kiev, Ukraine.

However, the lenses that bore the Hartblei name were improvements on the Arsenal originals.  This appears to have been down to several factors:

The result was lenses that were beautiful to behold and a pleasure to handle and to operate.  Also, since the actual optical potential of the original Arsenal lenses was high, subject to adequate manufacture and assembly, Hartblei’s products have a reputation for delivering first-class results.

Here we are looking at the Hartblei 2× converter. 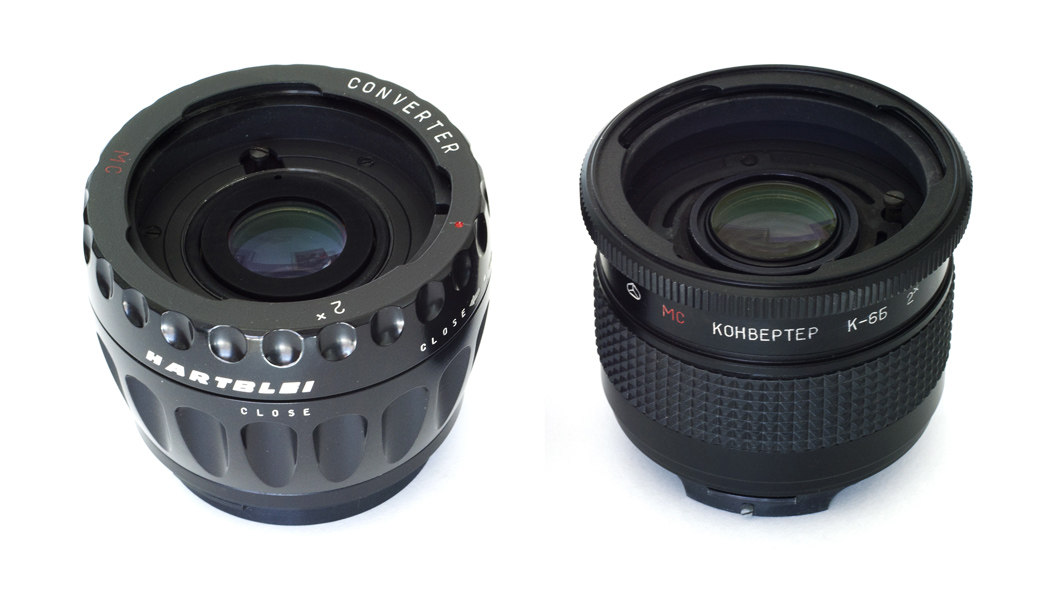 In this picture and those that follow, the Hartblei converter is on the left, and the original Arsenal version is on the right.
[htbl2_1.jpg]

The following points immediately strike us:

Here is the key data: 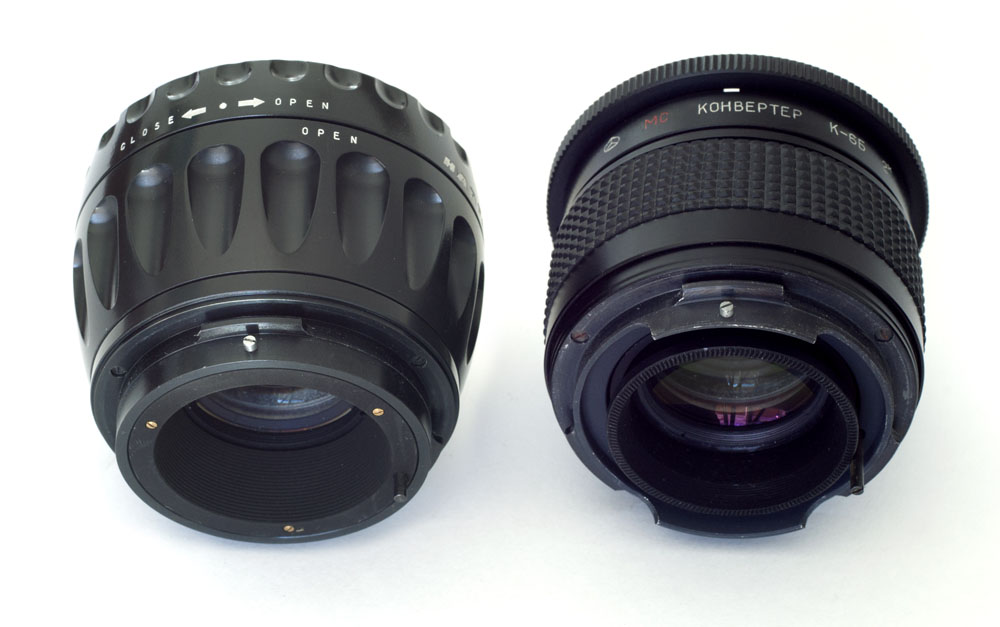 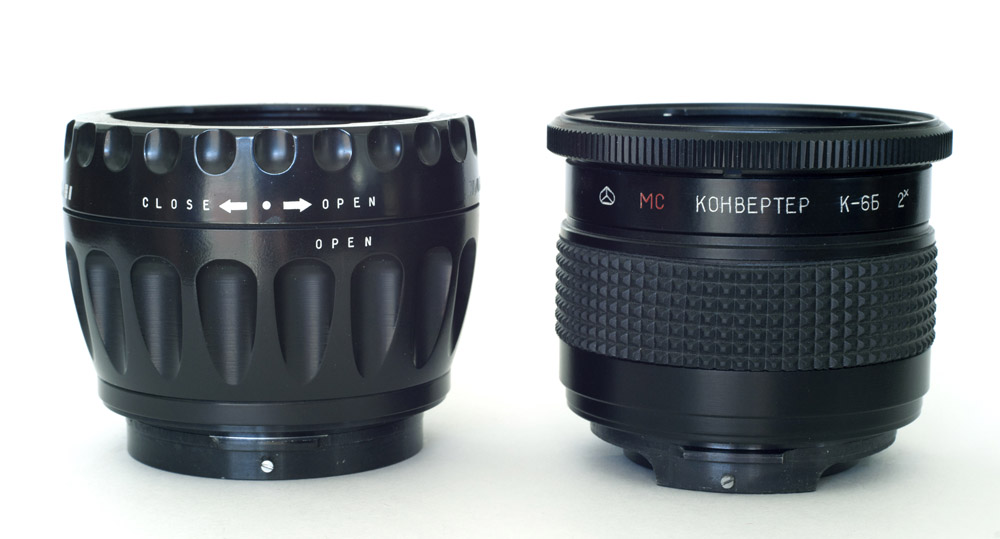 Some people have locked their lens onto their Pentacon Six, Kiev 60 or converter, because they have tried with all their strength to rotate the lens locking ring,
but they have been rotating it in the wrong direction!
This will not happen with the Hartblei converter, which is clearly labelled “OPEN” and “CLOSE”, with arrows in the appropriate direction.
[htbl2_3.jpg] 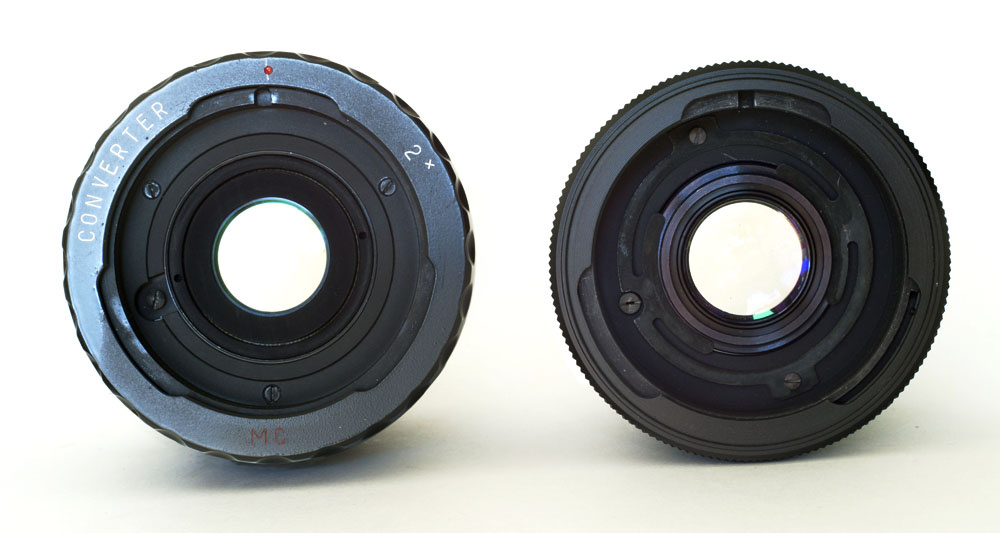 The pin that retains auto-aperture operation can be seen as a screw-head at the “8.00 o’clock” position in each converter.
[htbl2_4.jpg]

The Arsenal converter is functional and workmanlike, and it works as it should.  The Hartblei converter is also functional, but it is in addition smooth to handle and a pleasure to hold.  Rotating the lens locking ring (in the direction indicated by the arrow!) again reveals a smoothness that is missing from the Arsenal converter, where the locking ring squeaks as it is rotated.

However, when I was planning for a recent trip and wanting to take a 2× converter, I looked at this Hartblei converter and at the original, Arsenal, version, and took the Arsenal converter with me, because it is significantly smaller and somewhat lighter than the Hartblei converter.

Use as an extension tube?

There is one major difference between these two converters.  In the Arsenal 2× converter, it is possible to remove the optical component and use the empty barrel as an extension tube for close-up or macro work.  This is not possible with the Hartblei converter.  You may even say that in this the Arsenal converter scores over the Hartblei product.

So was that a stroke of genius by the Arsenal designers, and why was it dropped by Hartblei in their modification of the basic product?  I don’t know, but I can guess.

To get the maximum results optically, the lens elements in the converter must be exactly aligned and correctly spaced in relation to the lens or lenses with which they are to be used.  It always seemed to me that if I removed the optical component of the Arsenal converter in order to take some macro shots, and then replaced it crooked, crossed the threads, did not insert it far enough, or inserted it too far, I could ruin the results with whatever lens that I used it for.

Also, in a real-life field situation, removing and replacing the optical elements from the barrel without planting fingerprints on at least one of the surfaces was likely to be difficult.

Next, where was I going to put the optical elements when they were out of the converter, to protect them from scratches to the lens surfaces?

And so it is perhaps easy to understand why Hartblei decided that this was a feature that it did not need to incorporate; it was going for quality and precision, not cheapness.  I think that they were right.

How do they perform?  The Arsenal converter (the very one shown in these photos) has been extensively used over a number of years for tests on this website, and of course for “real world” photography.  The results of some of those tests can be seen in the “Lens test” section.  Some of the most demanding tests are reported on here.

Use with the 150mm Hartblei lens

Stylistically, the Hartblei 2× converter looks very attractive when combined with the Hartblei 150mm lens.  See more details in the report on the 150mm Hartblei lens, here.

I have not yet received back from processing tests with the Hartblei converter.  However, since it is optically identical and possibly has a superior multi-coating, it is likely to be equally good and probably indistinguishable in most situations, with possibly marginal improvements of contrast in difficult “against-the-light” or contre-jour shots.

It is definitely a pleasure to have and to hold.

To return to the introductory page on teleconverters, click here.

To go on to the next section, a test of the Hartblei 45mm shift-only lens, click here.