The following wide-angle lenses were included in the original test:

Since the original tests, most of which were completed in 2001, I have been able to add four key wide-angle lenses to my outfit:

Results of tests with these lenses are now included, although I was not able to return to Hitchin town square to shoot comparative shots.

The 40mm Curtagon lens can best be described as “extremely rare”.  To read the story of this lens click here.

For a review of a one-off modification of a Zenza Bronica 40mm lens to Pentacon Six mount, see here. 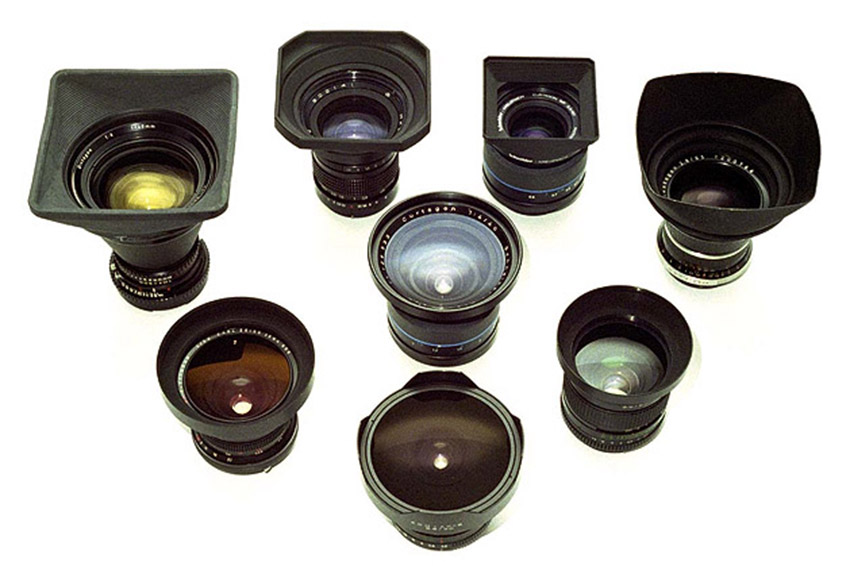 [C373-4A: the wide-angle lenses, together with the 30mm Zodiak, with lens hoods attached]

The 40mm f/4 Carl Zeiss Oberkochen Distagon lens fully deserves its high reputation. At its maximum aperture the depth of field is relatively shallow, even for this wide-angle lens, and the cobblestones of the road surface near to the camera are out of focus. However, in this shot a banner at the very edge of the shot within the plane of focus is beautifully sharp. At f/11 the increased depth of field renders the whole image sharp into the corners. 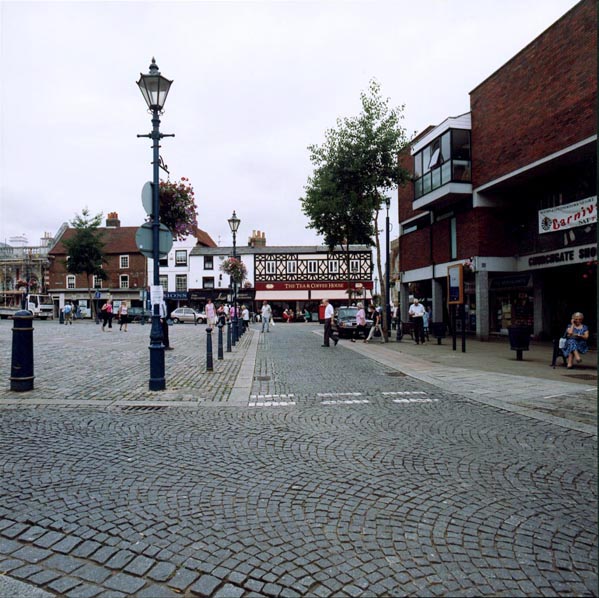 To read a review by me of the rare 40mm Joseph Schneider Curtagon lens click here.

This is the Ukrainian 45mm lens that you are most likely to find available for sale.  At the maximum aperture of f/3.5, the Mir-26B produced an image that was only sharp in the very centre. This is not just the effects of depth of field. The shop sign “Visions”, about one third in from the left and exactly half way down the frame, is quite fuzzy. At f/11 we benefit not only from increased depth of field; the whole image sharpens up tremendously. 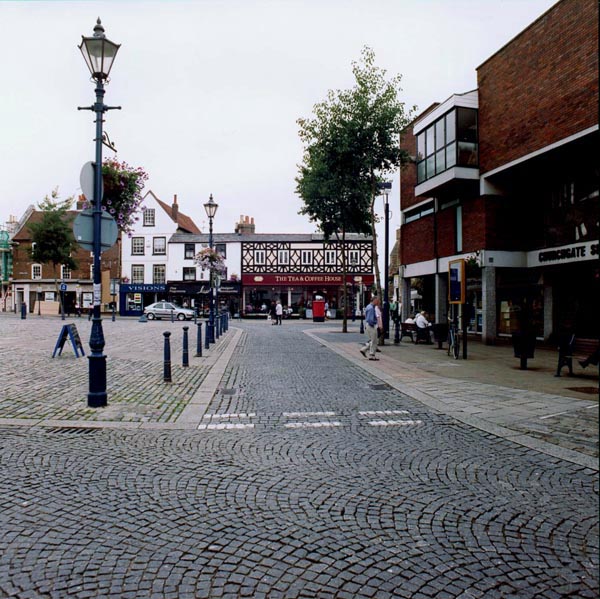 This lens suffers from slight barrel distortion at the edges.  In many shots – including this one – that distortion is not noticeable, but sometimes it can be seen, as in the following two images.

This extremely rare Ukrainian lens was apparently produced in tiny quantities in 1989.  According to some sources, probably less than 20 examples of this lens were produced.  The price of the lens when found therefore reflects this scarcity.  However, what is this lens like, and what is the quality of the images that it produces?

Technical specifications of this lens can no longer be found, so unless one strips a lens down, it is impossible to be sure how many elements and groups it contains.  According to one rumour, it “contains more elements than the 30mm Zodiak fish-eye lens”.  Most data published by Arsenal in the 1980s does not specify the numbers of elements and groups in lenses.  However, according to one report this lens contains 9 elements in 7 groups (one element more than the Mir-26).  The same report states that its resolving power is also better than that of the Mir-26: 55 line pairs per mm at the centre and 21 lp/mm in the corners, compared with 45 lp/mm in the centre and 16 lp/mm in the corners for the Mir-26.  This is a clear improvement on the more common lens.

Here is the Mir-69, placed beside the Mir-26 to give a clear size comparison: 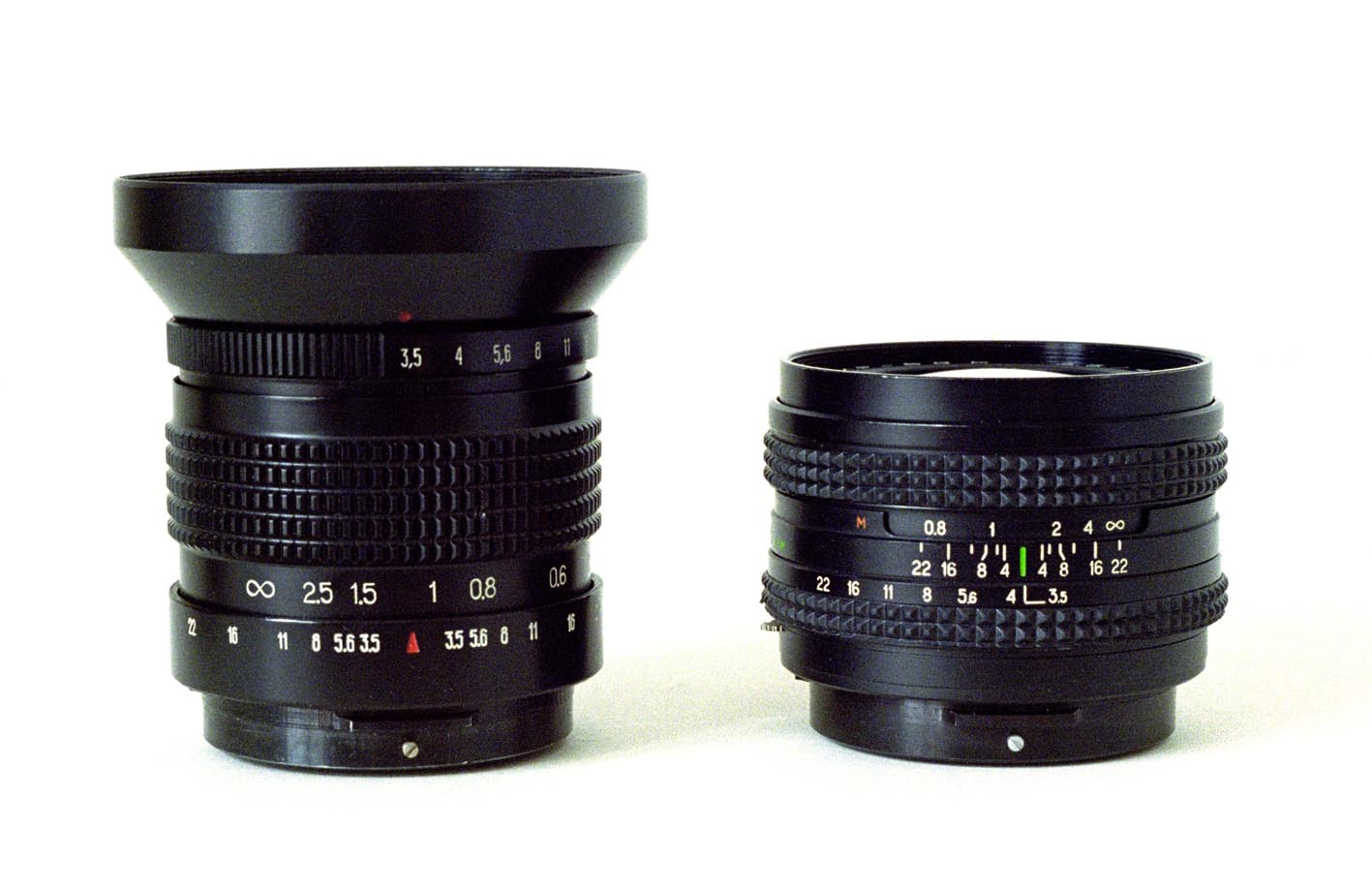 The two Ukrainian 45mm lenses: the more common Mir-26B on the left, and the rare Mir-69B on the right

The Mir-69 45mm seems to have exactly the same angle of view as the Mir 26B 45mm (as should be the case!).  It is virtually identical in size to the Vega 28B 120mm lens, which means that the front of the Pentacon Six case won’t quite close with it on the camera, but it is massively smaller than the 26B, takes 67mm filters instead of the 82m filters of the 26B and is little more than two-thirds of the weight of the 26B.

The Mir-69 has rubber studded grips for the focussing and aperture rings.  The aperture ring on this example is somewhat stiff, although the aperture itself snaps closed very fast and with no problems.  There is a stop-down lever in the usual place, helpful for stop-down metering on a Pentacon Six or Kiev 88 (on the Kiev 60 or 6C it is possible to use the stop-down lever on the camera body).  Closest focus is 0.5 metres, the same as the Mir 26B, and tests confirm that they are virtually identical.  The aperture ring is close to the body, with the focussing ring further forward, as is normal with most lenses (though the Mir 26B has it the other way round, with the aperture ring near the front of the lens!).

The more-common Mir-26B presents one problem that is described in detail above: barrel distortion.  How does the newer Mir-69B compare?  Is it better, the same, or worse?  I decided that it was time for some more kitchen shots, though I wasn’t able to cross continents to visit the kitchen illustrated above!  Here are the first results:

Well, they obviously didn’t lick the barrel distortion; it looks virtually identical on both Mir lenses.  The resolution however is excellent – one sees the grain of the film before any image deterioration is visible.  (This was of course 400 ISO film.).  Chromatic aberration has been corrected to a very high level in the new Mir-69 and is virtually impossible to see at normal degrees of enlargement.

For the results of further tests with these three lenses, see here.

These images show how important it can be when photographing with wide angle lenses to use a spirit-level on the camera.  Here I obviously didn’t, and as I couldn’t stand behind the camera, it was difficult to get it exactly horizontal!  Using the magnifying head or the angle finder could also have helped.

The 50mm Flektogon reveals a sharp, contrasty image at its maximum aperture of f/4. At f/11 there is (of course!) a further improvement in definition at the very edge of the frame, plus a slight increase in contrast, I think, but even with 8" × 8" prints the difference is not that obvious. A 7× loupe does confirm the improvement in definition. A great increase in depth of field at f/11 also brings the nearest cobblestones into sharp focus. 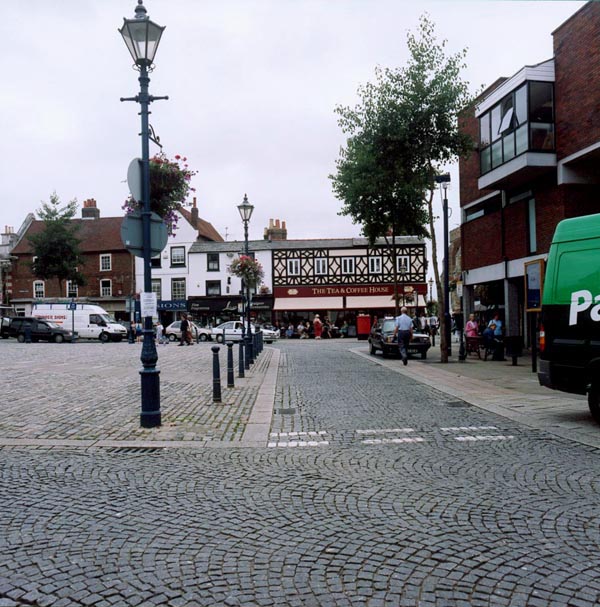 Some people are concerned about the white dots that can be seen within the internal mount of some of the 50mm Flektogon lenses, but this contrasty image was taken with just such a lens!  The lens used for this shot can be seen here.

For information on filters for the Flektogon, see here, here and here.

For a further test picture taken with a 50mm Flektogon, see here.

For a review of the rarely-seen FAN-1 wide-angle converter, see here.