Is the Pentacon Six too big?

Someone wrote to me, “I didn’t expect the Pentacon Six to be as big as this.”

Is it too big?

Well, if you must have a small camera, the Pentacon Six is not the one to go for.  Nor is the Hasselblad 500 series.  Nor the Pentax 67.  Nor many other leading film-based medium format cameras.
But if you want a camera that will give you maximum quality at a sensible price, then the Pentacon Six might be right for you.

We have recently got used to tiny cameras or even to using our mobile phone (US: cellphone) as a camera.  This can be great for certain purposes, such as:

Most of these have switched to digital – although you might be surprised at how many still carry a film camera as backup, and indeed how many landscape photographers, for instance, still shoot using film.

What sort of digital camera will these professionals use?  For most of them, most of the time, the minimum is a full-frame DSLR.  This means, a digital SLR with a sensor size of 24 × 36mm – the same size as the film frame in an “old-fashioned” 35mm film camera.  The best of these can produce images that seem to approach the quality of a medium-format film camera, so long as the image is not enlarged too much.  (Photographers producing images for point-of-sale, which might be printed several meters high, will need to use at least a medium format DSLR, such as the Hasselblad H4D-200MS, which is currently, in January 2013, on offer in the U.K. for only £26,395.00, body only – lenses extra, a lot extra!)

But here I am not comparing the Pentacon Six with a medium format digital camera, but with the digital equivalent of a 35mm format camera, a “full-frame” DSLR.  So in the contest to see which is smaller and lighter, the digital camera should win “hands down”, right?  Wrong!

I have chosen here the Sony Alpha A900, but full-frame DSLRs from each of the other major manufacturers (principally Canon and Nikon) will be of similar size and weight. 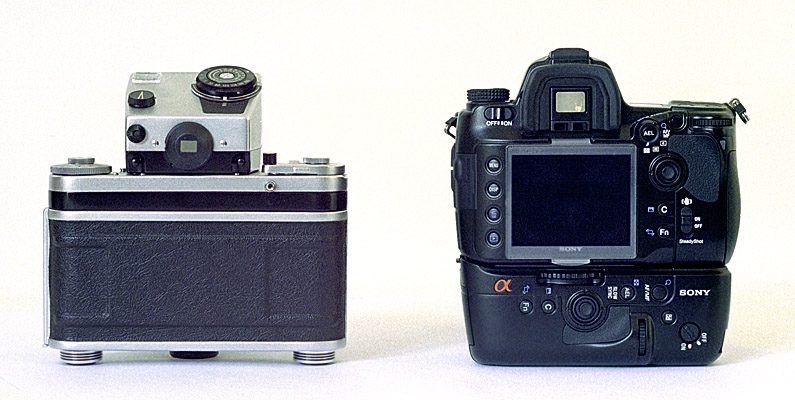 Looking straight at the back of the two cameras, photographed side by side,
gives a clear indication of the comparative sizes.
[c474_26.jpg]

Perhaps the Pentacon Six isn’t so big, after all

If you are looking for a camera that will give you:

you are likely to end up with a camera that is at least this size.  It will not fit in your coat pocket for that unexpected situation.  It is not a camera that you will casually carry with you everywhere.  It is a camera that you will get out and take out when your objective is to create great photographs.  Whether you go for a Pentacon Six, a full-frame digital camera, a medium format digital camera, or another brand of medium-format film camera will depend on your requirements and circumstances, including the amount of money you wish to invest or are able to invest in the camera and the system.  On this criterion, the Pentacon Six is likely to win out against both the whole range of “full-frame” digital cameras and most if not all professional-quality medium format film cameras, not to mention the medium format digital cameras!

So don’t let anyone tell you that it’s too big; it’s as big as it needs to be to do the job.

To go back to the introduction to the cameras, click here.