What a pity that the Kiev and Pentacon prisms and other finders are not interchangeable between the different cameras!

But now they are, thanks to Rolf-Dieter Baier in Germany, who has made an adapter frame that enables the Kiev 60 TTL prism to be mounted on the Pentacon Six and the Exakta 66!  This has many advantages:

With the Baierfoto adapter, you can fit more than just the TTL prism onto the Pentacon Six and the Exakta 66; the Kiev 60 “waist level” finder – the best of the lot – fits either camera beautifully. 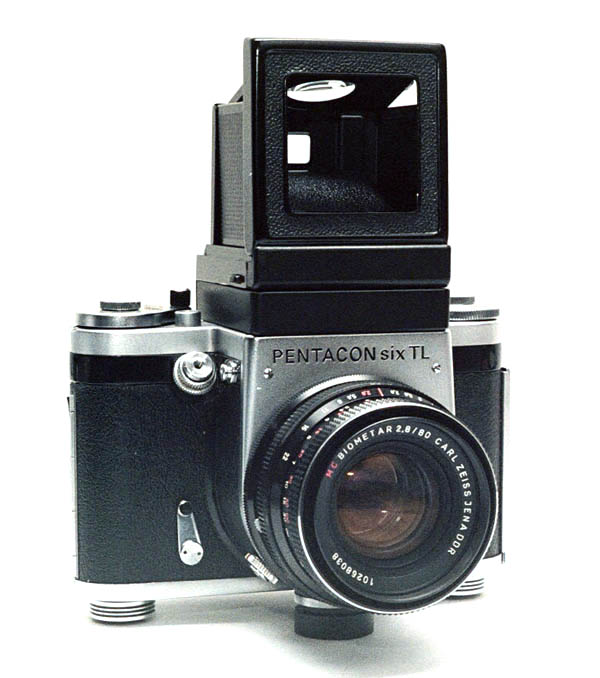 [C309-35: The Kiev 60 WLF fitted to the Pentacon Six via the Baierfoto adapter.
Here the front section has been folded down to provide the “sports finder” option
– see the detailed description of this, here.]

The only slight disadvantage is that when the Pentacon Six has a Kiev 60 prism, it isn’t possible to close the top of the ever-ready case.  The Baierfoto adapter is available from Rolf-Dieter Baier in Germany.  At the time of writing, he also has limited supplies of the Kiev 60 TTL prism, which he will calibrate at no cost to the focussing screen in your camera.

I do not advise using the Baierfoto adapter on the Praktisix or the Praktisix II, as these do not have the viewfinder locking pin that was introduced with the Praktisix IIA.  In consequence, the adapter, with its precious prism on top, could slide off the camera – unless you can find an alternative way of keeping it securely in place.  (The Pentacon Six metering prism will lock securely onto these older cameras, as it has its own internal locking clips.)

The English and American standard for tripod screws has for over 60 years been ¼ inch.  The German and Former Soviet Union standard has on the whole been 3/8" (although the tripod socket on the base of the Pentacon Six and Exakta 66 is ¼ inch).  The Kiev 6C and the Kiev 60 have a 3/8" tripod socket on their base.  More important, regardless of the camera that you have, many longer lenses, including some from Pentacon and Schneider-Kreuznach have 3//8" sockets.  Your tripod is likely to have a ¼ inch screw only.  So an adapter is required.  These are usually called “tripod bush adapters”.  Any “old-fashioned” camera shop – if you can find one! – is likely to have them.

Arsenal in Kiev also made adapters to use its Pentacon Six mount lenses on cameras with the Pentax K mount or the Nikon mount, both of which mounts were used in 35mm cameras produced by them.

Zörkendorfer are based in Munich, Germany.  Their English-language website is here.

As the image area covered by lenses for the Pentacon Six is also substantially larger than the 6cm × 4.5cm format, these lenses can readily be adapted for use with some of these cameras, and (non-shift!) adapters exist for the Mamiya 645 (see image above), the Pentax 645, and possibly other cameras with this format.  These adapters do not permit the automatic aperture pin on the lens to be operated by the camera, so the lens has to be stopped down manually before firing the shutter.

To return to the instructions front page, click here.