The scene chosen for the first tests

In my initial tests I chose to take pictures of the historic market square in the town of Hitchin in north Hertfordshire. (This is about an hours drive north of London.)  This sort of scene seems to me closer to the purpose for which cameras are designed than taking pictures of test charts. So I am not trying to measure line pairs per millimetre, evaluating instead the definition of the image enlarged to a significant size, with the help of a 7× loupe.  In later tests, I also scanned in negatives, using a top-resolution medium-format film scanner, and examined the results on a large, colour-calibrated computer monitor.

The 30mm f/3.5 Arsenal Zodiak-8B did not form part of the initial test, but a shot was taken with it to set the scene.  This beautiful lens was manufactured in 1992 and there is no indication that it is multi-coated.  One would not normally use this lens for architectural shots, so this picture does not show the true potential of the lens.  (You can see another  more appropriate  picture taken with this lens here.) 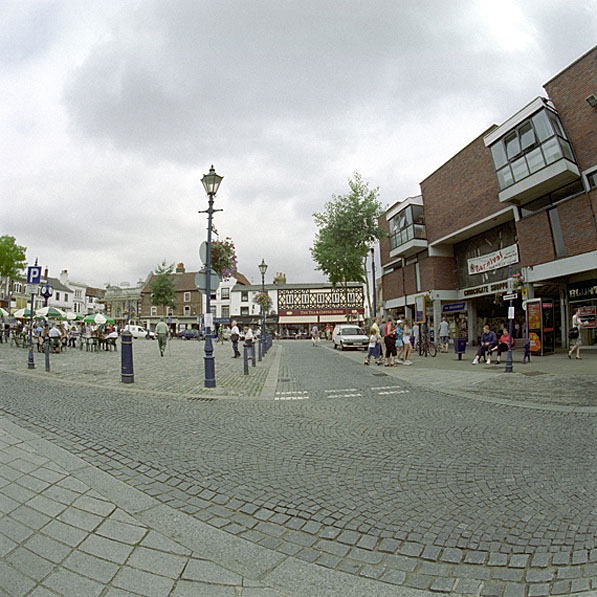 In the Hitchin Town Square tests, all lenses were tested at full aperture (with the one exception noted below) and at f/11. A tripod was used for all shots. The lighting for most shots was bright overcast, which yielded less contrast than full sunlight. I also understand that both types of Fuji film used produce low contrast.

As I was photographing a three-dimensional image, the reduction in depth of field at wider apertures is also a factor. The lack of sharpness of parts of the image far removed from the distance focussed on is of course not a fault. However, running across the centre of the image from left to right is a straight row of shops. These are all at the distance that was focussed on, so comparing the sharpness of the shop signs at the centre and edges of the image enables us to form a reliable judgement on the definition rendered by the lens.

Sometimes, the difference in image quality jumps out at the viewer.  Sometimes, the naked eye cant see any difference in quality in 8 x 8 inch prints.  At these points, I examined details at the centre, edges and corners, using a loupe that gave 7× magnification.  This is equivalent to studying close-up a print 56" × 56" (4 feet 8 inches × 4 feet 8 inches, or 1 metre 42 centimetres × 1 metre 42 centimetres)!  When this degree of magnification is needed to reveal a difference, which is the case with some of the lenses tested, that difference is small indeed, and the lens that comes in second  or even third  place may still be extremely good.  If it isnt, I say so.

These tests push the lenses to the limit, and beyond what the most demanding user  even a professional  is likely to need most of the time  both in terms of the degree of enlargement, and in terms on the demands placed on the lenses: how often do we shoot with a lens fully open?  In even moderate sunlight with 160 ISO film we are likely to need an aperture of f/11 or even f/16 at 1/125 sec.  For most purposes, we want the depth of field that these apertures provide, too.  To discover that a lens performs less well at maximum aperture than at f/11 is not a surprise.  On the contrary, the surprise is when the difference is not great.

I will scan some of the images in for you.  However, on a computer monitor, even at scanning 8" × 8" prints at an optical scanning resolution of 600 × 1200, the true definition yielded by the lenses just is not visible.  And if I scanned them in at that resolution, each image would be several Megabytes large, and would take ages to load.  So the images are more useful as illustrations of the angle of view and the nature of the subject being used for the tests, and we have to fall back onto the power of words to know what the minutest differences really are.

To go on to the next section, click below.
Next section (The 30mm lenses)