Joseph Schneider lenses for the Exakta 66 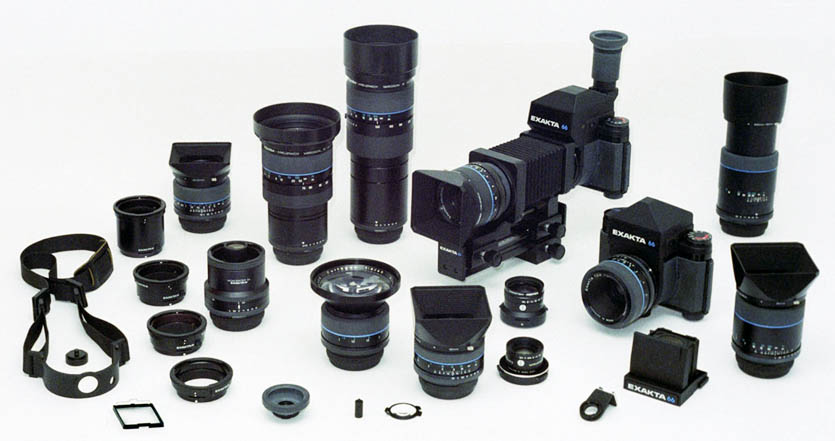 Joseph Schneider of Bad Kreuznach in western Germany is another of the great manufacturers of superb lenses, and many of their medium format lenses are made for a range of prestigious cameras, including Rolleis and Hasselblads.  They announced the following lenses for the Exakta 66, and all of them are reported as having been seen at some point, although I believe that the 40mm Curtagon lens may have never entered serial production.

There is much debate about the origin of these four 80mm lenses for the Exakta 66.  The amount of information involved merits consideration on a separate page, which can be found here.

(2)  The lens designations are taken from the original Exakta 66 publicity brochure, from about 1984.  The only Variogon lenses that I have seen in the Exakta 66 mount in fact have the designation “M”, not “MF”, on the actual lens name ring.  The revised colour brochure from about 1990 does not give any letter designation for any of the lenses.  To see a “square” filter system mounted on the two Variogon lenses, plus closer views of these two lenses, click here.

This is an item with the maximum optical quality, as one would expect from Schneider.  Further details of its operation can be found here and here.  General information on the use of tele-converters is here.

As well as the above lenses, which can (of course!) be fitted directly to the Exakta 66 (or to the bellows unit), Schneider made versions of some of their famous lenses exclusively for use on the bellows unit.  Here are the details:

The data in the tables above are based on published sources.  I do not have examples of all of these lenses (!), and I have not measured or weighed all of those that I do have.

I note that Pentacon GmbH Foto- und Feinwerktechnik in Dresden has two much newer products that use Joseph Schneider lenses in the Pentacon Six / Exakta 66 mount: their scan 3000 and scan 5000 professional scanners.  The 3000 brochure that they were distributing at Photokina 2002 showed the 60mm Curtagon MF on a scanner.  It’s great seeing these lenses living on into new technology, and an indication of the high quality images that they produce.

Most of these lenses are illustrated and tested in the Lens Test section of this website.  To go to the lens test section, click here.

To go on to the next section, click below.
Next section (80mm Lenses for the Exakta 66)