Bellows provide the most flexible way of obtaining close-ups, as they offer stepless variation in the distance between the lens and the camera body, and thus very precise control over the degree of magnification obtained.  A sturdy, well-built Pentacon bellows unit is available.  The bellows have an octagonal form within the two massive mounting rings (the rear one for the camera, the front one for the lens). 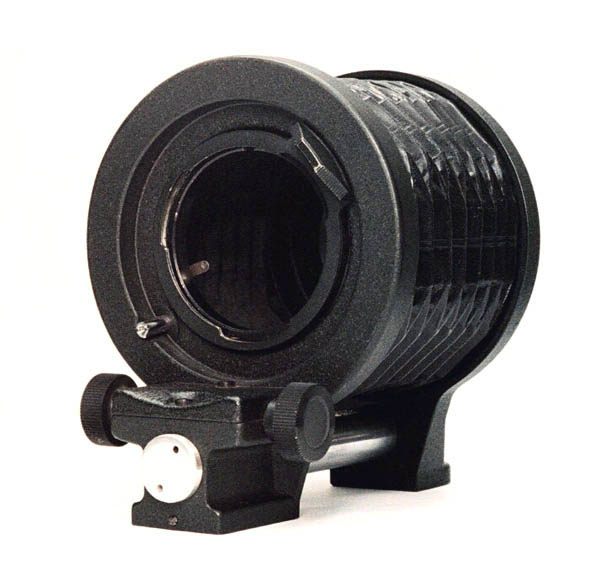 [C309-16P6B:  The Pentacon Six bellows: within the throat you can see the lever that maintains the lens at full aperture until the exposure is made.
Just below this lever, outside the throat, is the connection for the cable release that activates the lever.]

Only the front mount (or “standard”) moves with the Pentacon Six bellows unit.  In practice, I do not find this to be a limitation.  The standard does not lock, although it is well held in place by friction.  (The Exakta 66 bellows are more sophisticated, with both standards moving, and locking.)

The double cable release
A lever within the Pentacon Six bellows depresses the aperture pin on the lens, maintaining full aperture for compostion and focussing.  This is very important for two reasons:


To stop down the lens, it is necessary to screw a cable release into the socket on the front standard of the bellows, and to press this and hold (or lock) it depressed until the shutter is fired.  For increased ease and speed of operation, Pentacon made available a double cable release.

One plunger presses two cable releases, which are connected to the bellows and to the camera shutter release.  It is easy to adjust the depth of movement of each cable, so that the lens stops down just before the shutter fires (see the adjustable rings to the right of the main unit in the above image).  I have labelled the cables of my double cable release, to ensure that I connect them the right way round. 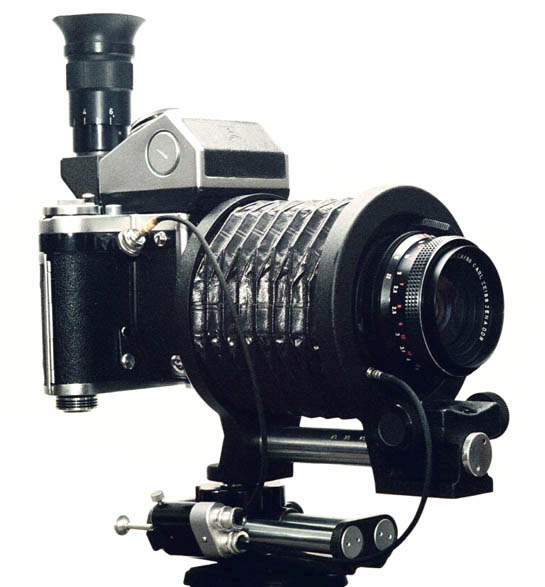 [C309-23: The Pentacon Six with bellows and double cable release.
To assist with accurate focus, I have here added the angle finder to the metering prism.]

To see the sizes of images that can be taken with the bellows, exposure compensation factors and other information, click here.
To see a report on using the Schneider macro lenses with the Pentacon bellows, click here. 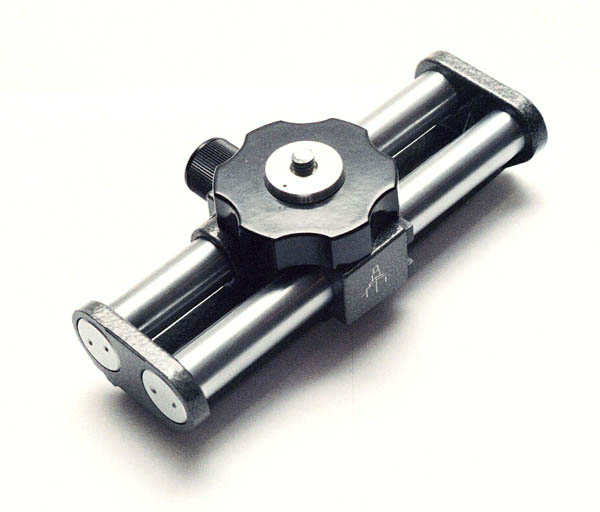 Adjusting the bellows extension should be used to vary the degree of magnification only.  To adjust the focus, the camera should be moved forwards or backwards, as adjusting the focus on the lens will have very little effect.  If you are using the camera hand-held, you can gently sway backwards or forwards until you achieve focus.  However, the depth of field available at high magnification is very shallow, so you will probably want to stop down to f/8 or smaller.  With the amount of light lost when the lens is mounted on bellows or tubes, you will often then be looking at very long exposures – ¼ second, ½ second or even longer.  With these exposure times, you need to mount the camera on a sturdy tripod.

At this point, moving the camera backwards and forwards by tiny fractions of an inch becomes difficult.  This is where the focussing slide comes in.

This slide is much shorter than the focussing slide incorporated within the Exakta 66 bellows, but in practice it proves entirely satisfactory, at least when used horizontally. 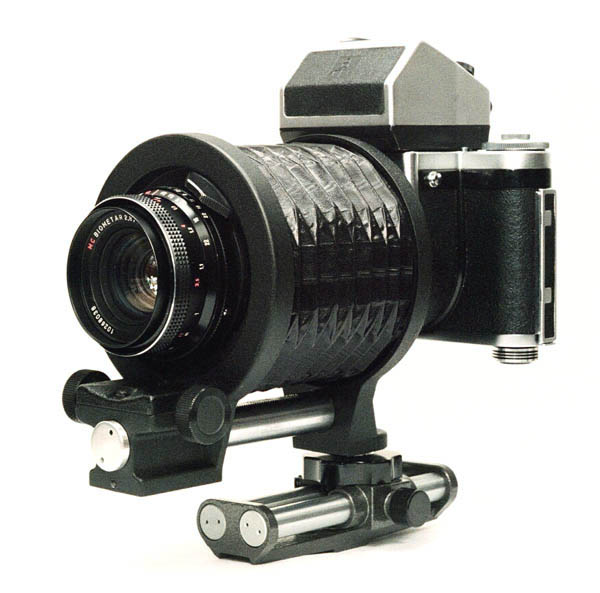 [C309-18: The Pentacon Six with bellows and focussing slide.
This can be mounted to either the front or rear standard of the bellows,
whichever provides better balance with the body, viewfinder, lens and extension chosen.]

The reversing tube
This useful tube enables the lens to be mounted back to front.  It is described in detail in the section on close-up tubes.  To see that section click here.

The aperture control ring
Of course, with the lens reversed, there is no longer any control of the lens aperture pin – but Pentacon thought of that, too!  A special extension ring with cable release connection can be mounted onto the back of the lens, and with this in place and a double cable release, fully automatic diaphragm control is back in operation! 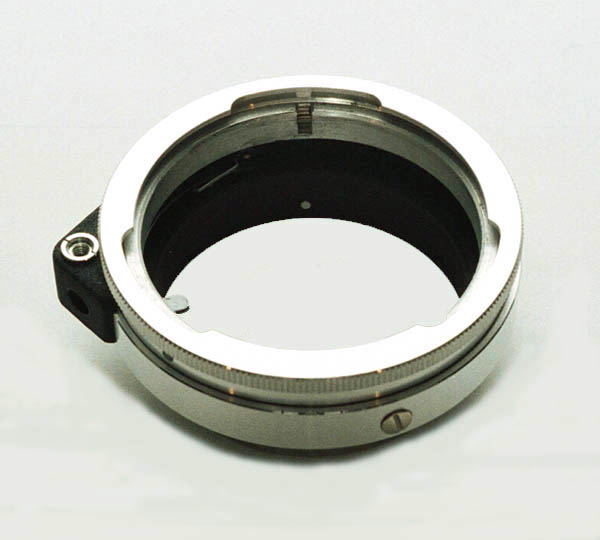 [C311-24: The aperture control ring
The lever that controls the lens diaphragm and the cable release socket
are clearly visible on the left.] 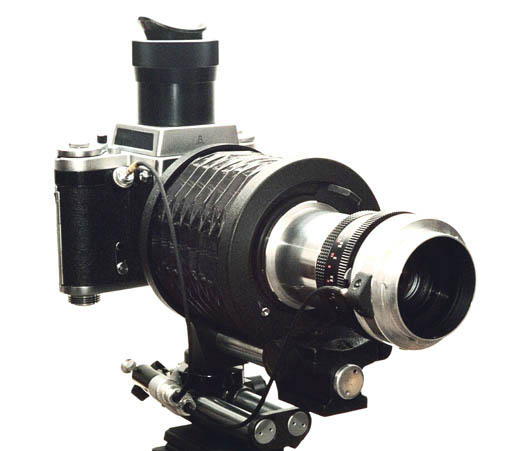 The Pentacon Six with the reversing tube mounted on the bellows and the special aperture control ring on the back of the lens,
with the double cable release in place.  In this picture, you can also see the magnifier head in use instead of a prism.
You can see the magnification achieved with this set-up (with the bellows on minimum extension) here.
(about half way down the page, on the right)
[C309-24]

Compatibility
There are some limitations on compatibility when using the Pentacon Six bellows.

Lenses
The Pentacon Six bellows work fine on my Kiev 60 with a double cable release, but when my 1988 Volna lens is fitted, it doesn't open up much beyond f/4.  This is because the diaphragm pin on Arsenal lenses withdraws slightly into the lens as it is opened up.  However, my 1995 Arsat B 80mm lens opens up fully on either bellows (!).  This sounds like another case of manufacturing tolerances at the Arsenal plant, the good news being that the newer lens works better.

Joseph Schneider Exakta 66 lenses cannot be used on the Pentacon Six bellows, as the much fatter aperture ring on the lens fouls the locking ring on the bellows.  The other way round there is no problem: Pentacon Six (Carl Zeiss Jena) lenses work fine on the Exakta 66 bellows.

Bodies
The Pentacon Six bellows cannot be directly mounted on the Exakta 66 with its metering prism fitted, as this projects forwards of the lens mounting surface and fouls the large rear standard of the bellows.  The bellows also cannot be directly mounted onto the Kiev 88-6 because of the location of the shutter release and the non-standard implementation of the Pentacon Six mount on these cameras.  However, in both cases a small extension tube can be mounted to the camera first, and the bellows will then fit without causing any problems.  To see more about using the Pentacon Six bellows on the Kiev 88-6, follow this link. 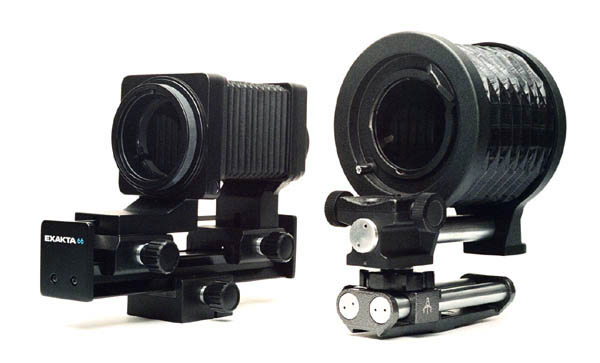 [C309-17:  The Pentacon Six bellows  – here with focussing slide fitted – beside the bellows for the Exakta 66]

Sam Sherman of Old Bridge, New Jersey says that “The bellows is the gateway to using odd, interesting lenses on the P6 system”.  Larger-format lenses can provide infinity focus with the bellows, and either the back of the lens or the front of the bellows can be modified with a suitable mount.  (This is particularly easy with the Novoflex bellows.)

You can see a picture taken with the Pentacon Six bellows at minimum extension here. (Scroll down and look for the rose.)  There are more pictures taken with the same bellows here.

To go on to the next section, click below.
Next section (Exakta 66 bellows)