Russian and Ukrainian lenses for the Kiev 60

Most of these lenses were to the best of my knowledge produced by the Arsenal factory in Kiev, Ukraine.  I welcome corrections and further information concerning sources of design and manufacture, or news of other lenses that have been available in the Pentacon Six / Kiev 60 mount.  Most of this data is based on published information; I have not weighed and measured all these lenses myself.


Notes
(1) From about 1990 Arsenal has renamed most of its lenses ARSAT.
(2) It is important to bear in mind that the Kiev 60 and the Kiev 6C have a depth of field preview lever on the camera body.  This lever stops down the aperture on any lens used that has an aperture-control pin (“automatic” lenses), to enable the user to check depth of field or to perform stop-down metering.  Therefore, when automatic lenses are used on these bodies, no lens depth of field lever (also known as aperture stop-down lever) on the lens is necessary.  However, knowing whether or not a lens has a depth of field preview lever is important if one plans to use one of these automatic lenses on a Pentacon Six, Exakta 66 or modified Kiev 88 with Pentacon Six mount, as none of these camera bodies have a depth of field preview lever.  Note that manual lenses, such as the Tair-33, do not have an aperture control pin, although it is possible to stop such lenses down quickly to a pre-selected aperture by rotating a ring on the lens or moving it between fully-open and stopped-down positions.
(3) Various versions of most of these lens have been produced.  As well as cosmetic changes and addition of multi-coating, some newer versions have a different body shape and/or are lighter in weight.
(4) This is an extremely rare lens.  You can read about it here.
(5) This lens was subsequently replaced by the Mir 38-B, which is much smaller and lighter.
(6) A later version of the Mir - 3B focusses to only 0.4m, which is incredibly close.  This is of course the distance from the subject to the film plane, so once the 74.1mm register distance within the camera plus the depth of the lens are taken into account, the front of the lens can approach to within only 215mm (approx 8 3/8") of the subject.
(7) According to “Discover Rewarding Photography: The Manual of Russian Equipment” by Ronald Spillman A.I.I.P., published in 1971 by Technical & Optical Equipment (London) Ltd.  The 1976 example that I measured was 105mm long.
(8) According to “Discover Rewarding Photography: The Manual of Russian Equipment” by Ronald Spillman A.I.I.P., published in 1971 by Technical & Optical Equipment (London) Ltd.  The 1976 example that I weighed was 570g, not including caps, which are of course not in place when the lens is being used.
(9) According to one report, a version of this lens with a depth of field preview lever has been seen.  I have never seen one with this lever.  It appears that there may have been a version of this lens with the Salyut/Zenith-80/Kiev 88 mount that had a DOF lever.  This mount is not compatible with the Pentacon Six nor the Kiev 60.  A preview lever is not needed on the lens when it is used on a Kiev 60 or 6C.  See note 2, above.
(10) The 90mm Vega was supplied as the standard lens with the Kiev 6C and with the Kiev 60 when it was first introduced (1984).  By 1989, when I got my Kiev 60 in Moscow, the standard lens was the Volna-3.
(11) As measured by me, 16.12.12.
(12) Data from a Russian website (http://www.photohistory.ru/index.php?pid=1218271229066967), which also states that the minimum aperture is f/16.  I deduce from the picture on that website that the lens has a depth-of-field preview lever.  A German visitor to this website reports that the Telear-4B that he received in the mid 1990s from a contact in Russia has a slightly different specification: Closest focus: 3.3 m, dimensions: about 145 mm long, weight: 1130g, minimum aperture: f/22.  Like the lens in the above specification, it takes 77mm filters.  His lens was apparently manufactured in 1984 and is illustrated below.
(13) This lens is extremely rare.  It appears that there was just one production run, which took place in 1995.  According to some reports, just 75 lenses were made.  According to other reports, the number was much lower.  You can see a detailed review of this lens, starting here.
(14) Something must be wrong here!  If the 500mm APO does have a focal length of 500mm and the 3M - 3B does have a focal length of 600mm, the angle of view will not be the same.  This is based on published data.  Actual tests show that the angle of view with the 3M-3B is substantially less than with the Arsat APO MC and Pentacon 500mm lenses.  Details of these tests can be seen here.
(15) This lens is extremely rare, and it seems that there were only extremely small production runs of it, often separated by gaps of many years.  Between the different production runs, various cosmetic changes were introduced.  There were also some other changes.  For detailed information on this, see the page on this lens, here.

On its website, Araxfoto lists the following additional data on these and some other lenses:

(1) Araxfoto seems to have used the abbreviation “N/A” with the meaning “not available” (rather than the more normal meaning, which is “not applicable”).
(2) I assume that this is the f/5.6 Rubinar lens, which is described here.
(3) According to my notes, it would appear that this was previously listed in the Araxfoto website as 55mm.  I have just (August 2015) received from Arax a handy chart of this lens data, printed on a small card, and it shows the filter size for this lens as 52mm, which is indeed the size of the filter on the ZM-3B lens that I have (see here).  Perhaps I made a typing error when I copied the data from the Arax website.  The following link still works, and the information, checked today, is accurate.

See http://araxfoto.com/lenses/info/ for the original chart.  This data was downloaded on 23.10.10.

The manufacturers were extremely proud to have received the “Grand Prix” award for this lens at the 1958 Universal Exhibition at the Atomium in Brussels in 1958, and for decades referred to this award in their publicity.  The lens is good, but extremely heavy, and it has no automatic control for the aperture – admittedly a very new concept at that time.  Instead, it has a manual pre-set lever that enables the lens to be opened to full aperture for composition and focussing, and then stopped down to the pre-selected aperture without having to look at the diaphragm settings.  The lens also has a built-in retractable lens hood.  This is, however, extremely shallow and can’t provide much shading.  It is illustrated here next to a much newer and slightly smaller version developed for use with the 35mm Zenith Photosniper camera.

[C436-16] Tair-33 300mm lens in Kiev 60/Pentacon Six mount, with the subsequent Tair-3S in M42 mount for the Photosniper 35mm camera outfit.
Note the unusual focussing wheel on the Photosniper version, and the cable that transfers the chosen aperture value
to the Zenith camera metering.  The bar visible under this lens at the back stops down the aperture when the shutter is fired.

The Tair-33 can also be seen here and some results of tests with the lens can be seen here.

In 2003 and again in 2008 a “Jupiter-6” lens was offered on eBay.  It was described as an extremely rare f/2.8 180mm lens in Kiev 60 / Pentacon Six mount.  It appeared to have no aperture pin, to judge by the photographs on the auction.  On both occasions the illustrations showed an all “silver” metal finish.

The two 500mm Rubinar mirror lenses (f/8 and f/5.6), which are made by the LZOS factory just north of Moscow in Russia, not by Arsenal at Kiev in Ukraine, and are designed for 35mm cameras, have occasionally been modified to work with Medium Format cameras that have the Pentacon Six mount.  I have been told that the results are very good, however, my experience with the samples that I have tested has not confirmed this.  See the results of those tests, starting here.

Arsenal also produces a 2× converter and a 1.4× converter in the Kiev 60 (Pentacon Six) mount.

This data is based on published sources.  I do not have examples of all of these lenses (!), and I have not measured or weighed all those that I do have.  Sources vary on some details such as weights, and these differences may correspond to different versions of a given lens.

Here are the lens diagrams published in the instruction manuals of two of the lenses.  Not to the same scale.

As described here, there were certain problems with the original design of the lens hood or shade for the Jupiter 36 lens.  This design detail was obviously changed at some point – perhaps by someone who couldn’t get his filter out of his shade!

It would appear that all of these lenses (possibly with the exception of the 3M-3B mirror lens, the 500mm APO lens and the Mir-69B 45mm lens) were produced in two different mounts:  the Pentacon Six mount used for the Kiev 60, and the Hasselblad 1600F/1000F mount used for the Salyut / Zenith 80 / Kiev 88.  When making a purchase, it is essential to get the lens in the right mount, as they are mutually incompatible.

Until recently, manufacturers in the former Soviet Union described the Pentacon Six mount as being: mount B (in Cyrillic – the Russian alphabet – this a symbol like a b with a horizontal bar extending right from the top of the upright: Б).  They described the Kiev 88 mount as being: mount V (B in Cyrillic – the Russian alphabet).  The differences are summarised in the following table:

It is therefore necessary to take great care when ordering a lens to make sure that it has the right mount for the camera.

To see pictures of the Pentacon Six and Salyut/Kiev 88 lens mounts, go here.

If you build up a system consisting of the 80mm Volna, the 120mm Vega and the 250mm Telear, you will have a flexible, compact and lightweight outfit that will cover most situations, with all lenses taking filters of the same size!  Naturally, if you add a wide angle lens to the outfit, you will need larger filters. 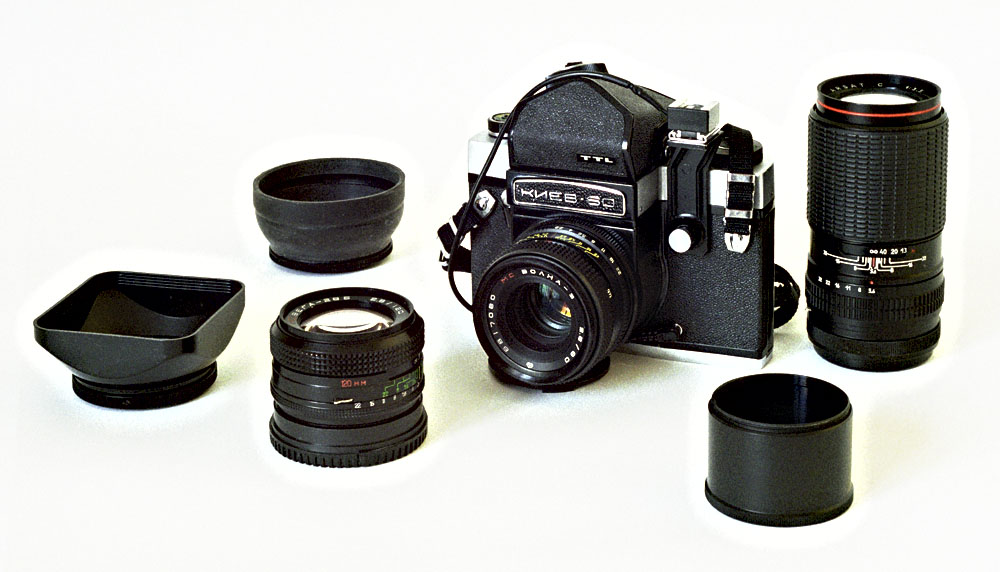 [C463_2.jpg]
This image of such an outfit includes a hot-shoe adapter in the flash bracket, connected by a cable to the PC sync socket.
This permits use of a flash that does not have its own sync cable.

Most of the Russian and Ukrainian lenses listed above are illustrated and tested in the Lens Test section of this website.  To go to the lens test section, click here.

To go on to the next section, click below.
Next section (Joseph Schneider lenses for the Exakta 66)