Other Advantages of Shift Lenses

The instruction manuals that come with the 45mm Hartblei Super-Rotator and the 55mm Arsat shift lens suggest other circumstances where using these lenses can be advantageous.

Hartblei and Arsat suggest that for some shots, you can get the equivalent of using a much larger format.

This results in a combined film coverage, according to my calculations, equivalent to slightly more than a 6×8 frame.  Hartblei says the same as me, while Arsat says that the combined frame (with the same degree of shift) is equivalent to a 6×9 camera.  A 6×8 camera in fact produces an image 56mm × 76mm.  This procedure will give you a combined image 56mm × 80mm.  Of course, you have to combine it, which involves scanning both frames to create one, wider image.  There is considerable overlap, and in imaging software you can use this overlap area to eliminate problems, such a walking person who appears in slightly different places in each frame.  You can erase one of them  or even both, if you prefer!

To avoid your reflection appearing in a mirror or shop window, you can move to the left, and then shift the lens to the right, to get virtually the same image, minus the reflection!

These shots are from the Hartblei Super-rotator instruction manual
(note the Pentacon Six with Waist Level Finder!)

The Arsat 55mm shift lens manual illustrates the same point with a diagram: 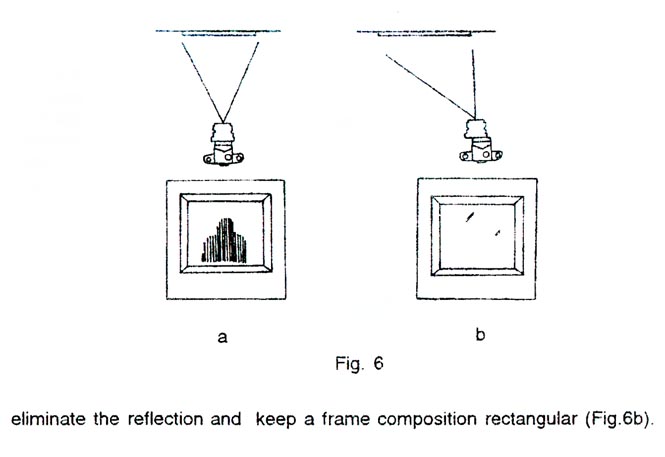 (note the Kiev 60 with metering prism  but then of course it is made by Arsenal, who make the lens!)

The Arsat manual also explains how on some occasions you can not only eliminate reflections, but even actual objects, such as street lamps or telegraph poles, with careful use of horizontal shift.  It illustrates the problem and the solution with another diagram:

But there is more!  As well as shifting lenses, it is possible to tilt them.  See the next section!

To go on to the next section, click below.
Next section (Tilt lenses)

To go back to the section on Other Accessories, click here.