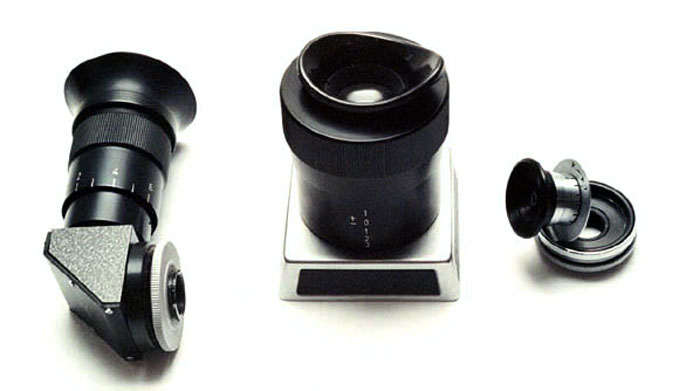 [C309-11: Three viewing aids for the Pentacon Six: the angle finder, the magnifier head and the magnifying attachment]

Various viewing aids were manufactured by Pentacon for the Pentacon Six.  These are particularly helpful to ensure critical focus with the narrow depth of field that occurs when using bellows or extension tubes.  Some of these accessories were subsequently made available in the Exakta 66 finish.  While they were cosmetically different, optically they were I believe unchanged from the Pentacon/Zeiss designs.

This can be attached to the metering prism on the Pentacon Six or Exakta 66 to provide more comfortable viewing when the camera is low down or horizontal, as when copying documents or images.  It has adjustable diopter correction for the user.  This seems to be either optically slightly different with each model, or they have been assembled differently, as correct focus for my eyesight with the Pentacon angle finder is at approximately +0.6, while correct focus for my eyesight on the Exakta 66 angle finder is at approximately +2.9  However, the focussing adjustment in both directions is absolutely enormous, so you are unlikely to encounter a problem, regardless what adjustment your eyesight might need.

Rear and side views of the Pentacon Six and Exakta 66 angle finders.
Note the Ernemann Tower symbol on the Pentacon finder.

On the Exakta 66 TTL prism, the Pentacon Six angle finder’s locking ring may damage the rear surface of the prism, so the use of a small rubber washer is recommended.

The magnifier head provides a much enlarged image of the whole viewfinder.  It also has diopter correction over a wide range.  But, of course, one loses the metering, so I prefer the TTL prism plus the angle finder.  To see a close-up of this accessory, see the section on Waist Level finders & Magnifying Heads.

This is also called “The Focussing Telescope” in some Pentacon literature.  It is designed to be attached to the prism viewfinder, and provides an additional 2.7× enlargement of the central area of the viewfinder image – extremely helpful for precise focussing.  As the whole of the frame cannot be seen with the magnifying attachment in place, it can easily be flipped up to check composition.  It incorporates adjustable diopter correction for the user. 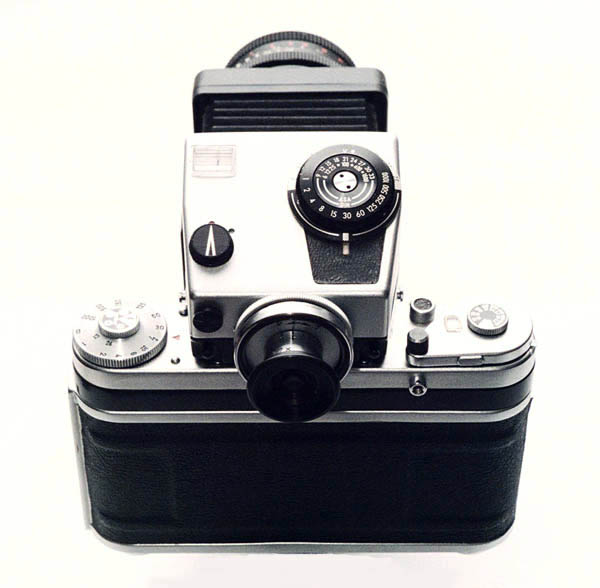 [C309-25:  The magnifying attachment in place on the Pentacon Six TTL prism.
(Note that the Carl Zeiss Jena 80mm Biometar “II” lens has been used with the Exakta 66 bellows – why not?! They fit!)]

This looks superficially similar to the magnifying attachment, but the difference is that, as supplied, it contains no optical components.  It merely shields the eye from stray light, giving a potentially improved view of the viewfinder image.  This item was produced for the Pentacon Six and the Exakta 66.  It has the additional advantage that by adding a dioptric correction lens, available from an optician, spectacle wearers can view the image sharply without needing their glasses.  The dioptric correction lens needs to be held in place with a retaining ring that is not supplied with the eye cup!

Important!  Getting the accessory with the right mount for the prism

The original Pentacon Eye cup was supplied in two versions with different mounts.

Pentacon made seven different focussing screens for the Pentacon Six.

You can read more about the focussing screens for the Pentacon Six here.

In my opinion, the best general-purpose screen for the Pentacon Six was the Fresnel screen.  This increased viewfinder brightness by the equivalent of one stop (the viewfinder image becomes twice as bright), and I used one for over 20 years.  With this screen installed, it was necessary to set the film speed on dot on the TTL meter dial, instead of on the usual triangle, to compensate for the extra brightness. 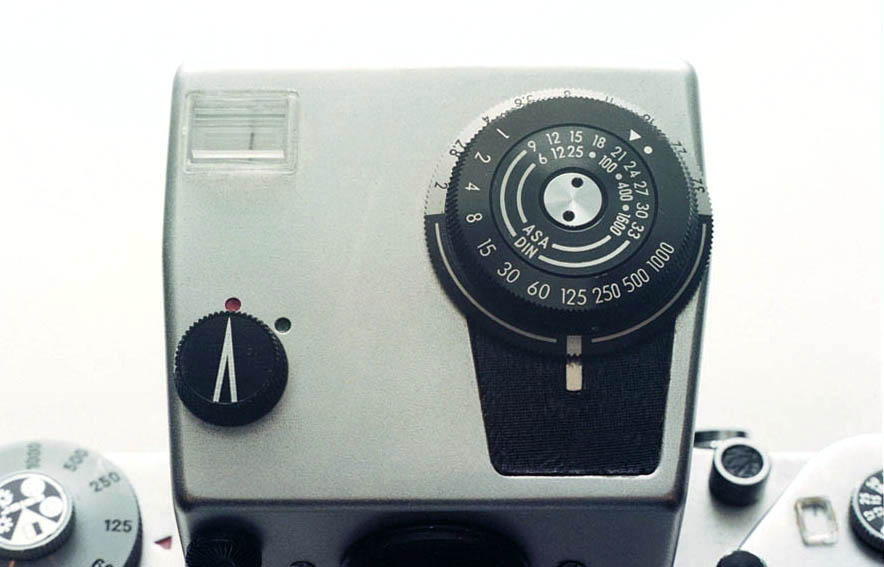 [C311-15: The top of the Pentacon Six TTL finder,
showing the dot and triangle index marks for setting the film speed.]


You can see some notes on how to change focussing screens here.

Magnifying lenses were available covering a wide dioptric range for use in the Exakta 66 Waist-Level Finder.

More details concerning these lenses can be found here.

The Kiev 88 focussing back
Arsenal make a focussing back for the Kiev 88.  This can be mounted on the back of the body in place of a magazine, to check exact composition and focus.  This is particularly useful if the focussing screen in the top of the body needs to be adjusted or replaced. 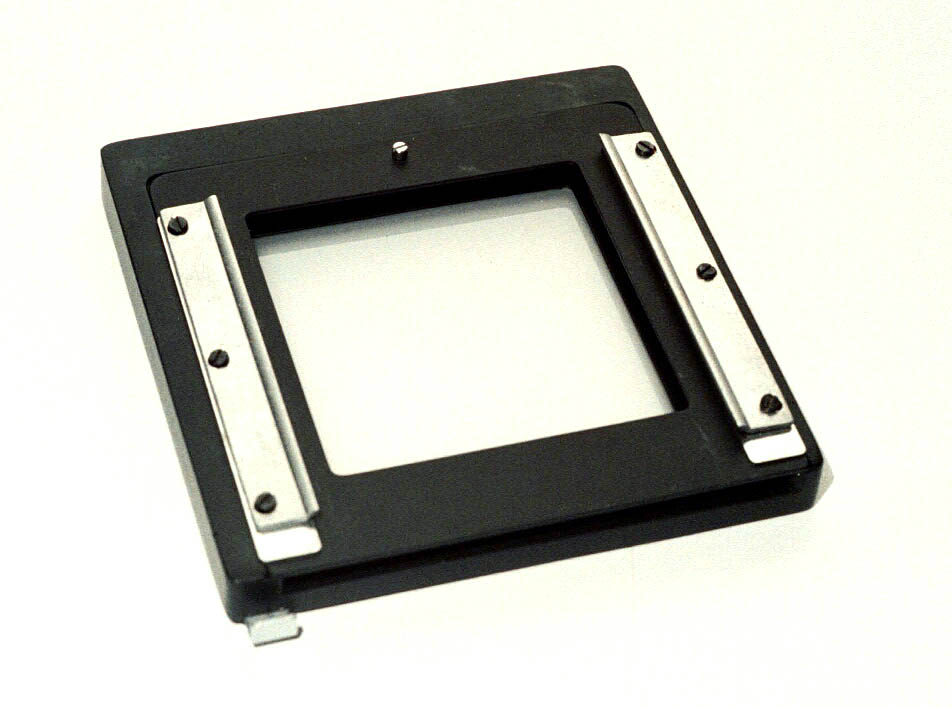 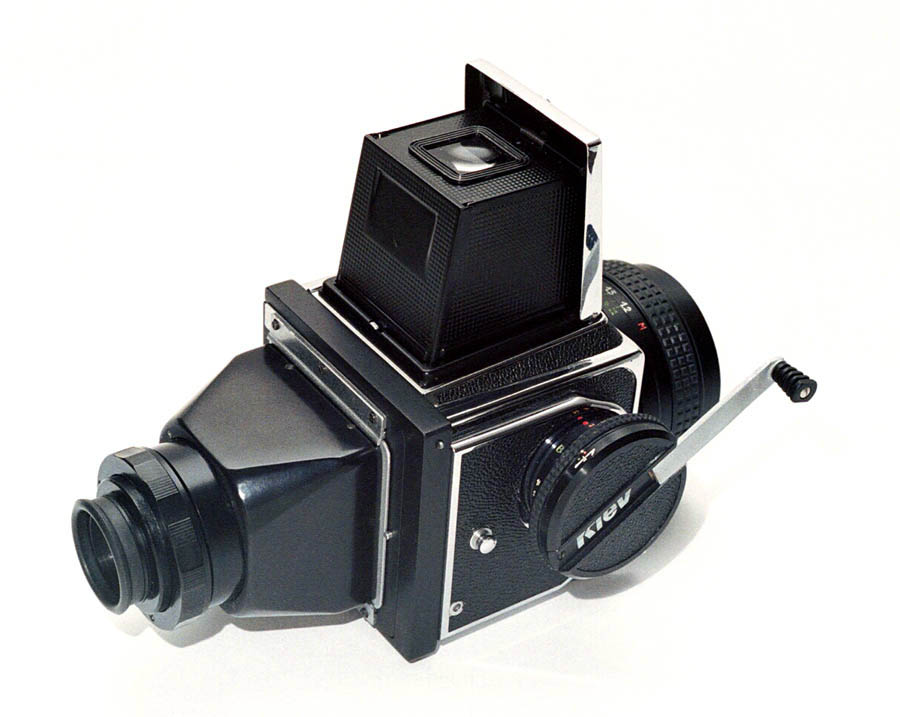 Remove the magnifier head and focussing back combination from the camera, and you have a viewfinder for 6 × 6 mounted slides!  But on mine internal screw heads jam slides with slim-line plastic mounts, so use with caution.

To go on to the next section, click below.
Next section (Focussing Screens)